A magical encounter in Spain… the Pomegranate, symbol of Granada

As many of you know I love travelling. However because of COVID my travels came to an abrupt end in March 2020. Finally in September 2021 I was able to make a trip to Granada, Andalucía, Spain.

Staying in one of the villages which have in merged slowly into the greater area of Granada I quickly noticed the use of the Pomegranate as a symbol. From mosaics on the pavements to tiles on the walls.

Now the word for Pomegranate in Dutch is ‘granaatappel’ and I wondered if this was really referring to it as the ‘apple-of-granada.’ Or the connection with ‘granaat’ or garnet in English and the many garnet coloured seeds of the Pomegranate.

This is what I found…

“Before the 11th century the most important town of the region was called Medina-Elvira and was located in Atarfe. But then the rulers of the Zirid dynasty changed the capital from Medina-Elvira to Medina Garnata. From Medina-Garnata comes the name “Granada”, due to phonetical evolution.

If we strip down the name, we find out that “medina” comes from Arabic and is a form of referring to cities, similar to our use of the suffix “-town.” When it comes to the origin of the word “Garnata,” we find different explanations.

Some have the theory that the word comes from Latin (“granatum” which is in Spanish “granado”) and means pomegranate tree. The pomegranate is called “granada” in Spanish and would therefore give the town its name. Other sources claim that the name comes from Arabic (“gar-anat” which means “hill of the pilgrims”).

The fruit comes originally from the region between Iran and the Himalaya. The Persians in Iran adored the Pomegranate and in the Coran it is portrayed as a tree of the paradise. One day the pomegranate crossed from Iran the gulf and reached the desert. There it gained more importance, as it was possible to transport the fruit over large distances in the desert without it losing its qualities due to its thick skin. It was the Berbers, nomads living in North Africa, who brought the pomegranate to Europe.”

As I mentioned, in Granada you can see the image of pomegranates on street signs, on local pottery and ceramic tiles, while the fruit is used in dishes in countless tapas bars.

A little more about the pomegranate (Punica granatum). It has been known for thousands of years and it has been a vital provider of food and medicine across diverse cultures and civilizations.

The Latin name is however based on a mistaken origin of the fruit.

“The genus name given to pomegranates (Punica) came from the Roman name for Carthage, an ancient city in Northern Africa. The Romans mistakenly assumed pomegranates derived from Africa. In fact, pomegranates have a native range from North East Turkey to Afghanistan. The pomegranate fruit was also given a classical Latin name, Malum granatum, meaning “grainy apple”.” I also read somewhere, but can’t find the link now, that the name also referred to the many seeds inside the pomegranate.

Symbol of death and fertility

In Greek mythology, the pomegranate was known as the ‘fruit of the dead’ as it was said to have arisen from the blood of Adonis. It also prominently featured in the myth of Hades and Persephone.

Hades, God of the underworld, used pomegranate seeds to trick Persephone into returning to the underworld for a few months of every year.

“In the Greek myth of Persephone’s abduction by Hades, lord of the underworld, the pomegranate represents life, regeneration, and marriage. One day while out gathering flowers, Persephone noticed a narcissus of exquisite beauty. As she bent down to pick it, the earth opened and Hades seized her and dragged her down to his kingdom. By eating a few pomegranate seeds, Persephone tied herself to Hades — the pomegranate being a symbol of the indissolubility of marriage. Inconsolable at the loss of her daughter, the corn goddess Demeter prevented the earth from bearing fruit unless she saw her daughter again. Zeus intervened and worked out a compromise: Persephone should live with Hades for one third of the year and the other two thirds with Demeter. Persephone’s return from the underworld each year is marked by the arrival of Spring.”

So, alongside death, the pomegranate also symbolised fertility in Ancient Greece and Rome, probably because of it being ‘many seeded’.

In Ancient Rome, newlywed women wore crowns woven from pomegranate leaves, and the juice of pomegranates was used to cure infertility.

It was during my visit to the Alhambra, in September 2021, that I saw pomegranates actually growing on a tree for the first time. I would later see many more pomegranate trees when visiting a friend in Orgiva. 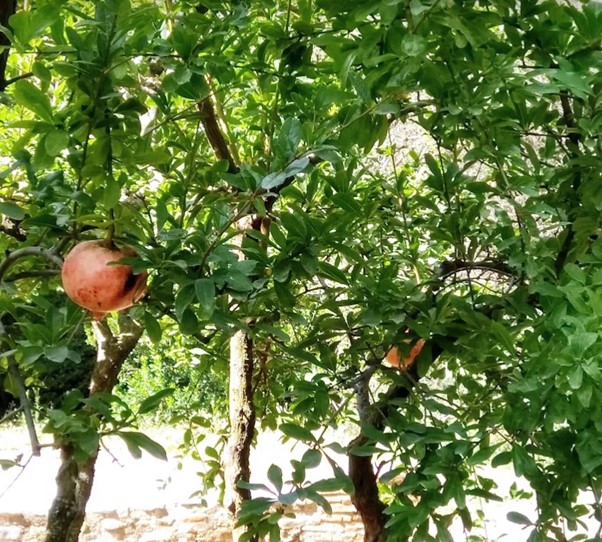 Here we see The Gate of the Pomegranates (Spanish: Puerta de las Granadas). It is an historical access point of a pathway that leads through the Forest of the Alhambra to the Nasrid palace that is the Alhambra, located in the city of Granada, Spain. The path starts in the city centre, Plaza Nueva, and continues up the Cuesta de Gomérez, before reaching the monument.” 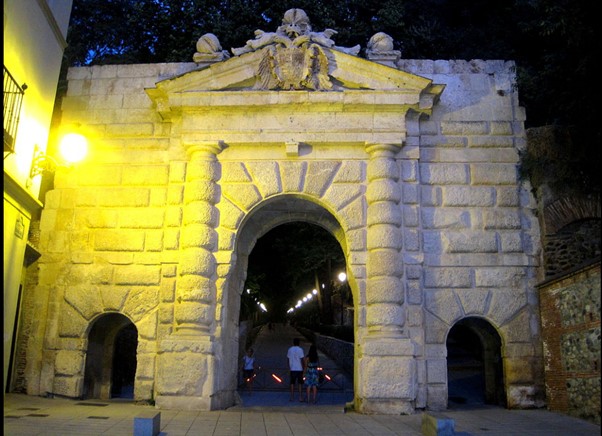 (The Gate of Pomegranates- entrance to the Alhambra )

“The Alhambra was so called because of its reddish walls (in Arabic, («qa’lat al-Hamra’» means Red Castle). It is located on top of the hill al-Sabika, on the left bank of the river Darro, to the west of the city of Granada and in front of the neighbourhoods of the Albaicin and of the Alcazaba.

The Alhambra is located on a strategic point, with a view over the whole city and the meadow (la Vega), and this fact leads to believe that other buildings were already on that site before the Muslims arrived. The complex is surrounded by ramparts and has an irregular shape. It limits with the valley of the river Darro on its northern side, with the valley of al-Sabika on its southern side and with the street Cuesta del Rey Chico on the eastern side. The Cuesta del Rey Chico is also the border between the neighbourhood of the Albaicin and the gardens of the Generalife, located on top of the Hill of the Sun (Cerro del Sol).

The first historical documents known about the Alhambra date from the 9th century and they refer to Sawwar ben Hamdun who, in the year 889, had to seek refuge in the Alcazaba, a fortress, and had to repair it due to the civil fights that were destroying the Caliphate of Cordoba, to which Granada then belonged. This site subsequently started to be extended and populated, although not yet as much as it would be later on, because the Ziri kings established their residence on the hill of the Albaicin. ”

For full information: see this link.

Suffice it to say here are some of the photo’s I made and a video clip. It is truly amazing and magical. The Moorish influence is still felt in this ‘City of the Pomegranate’ 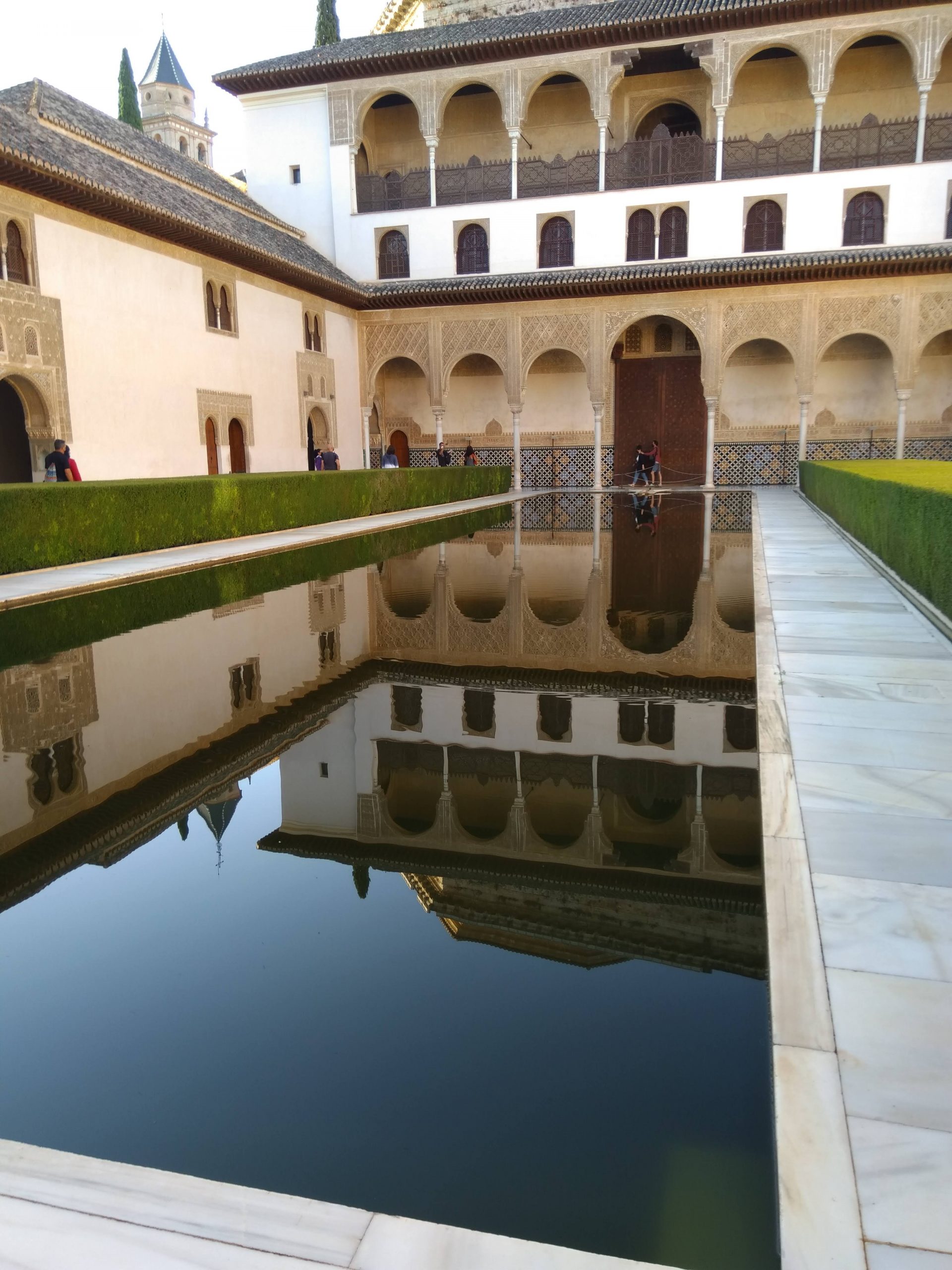 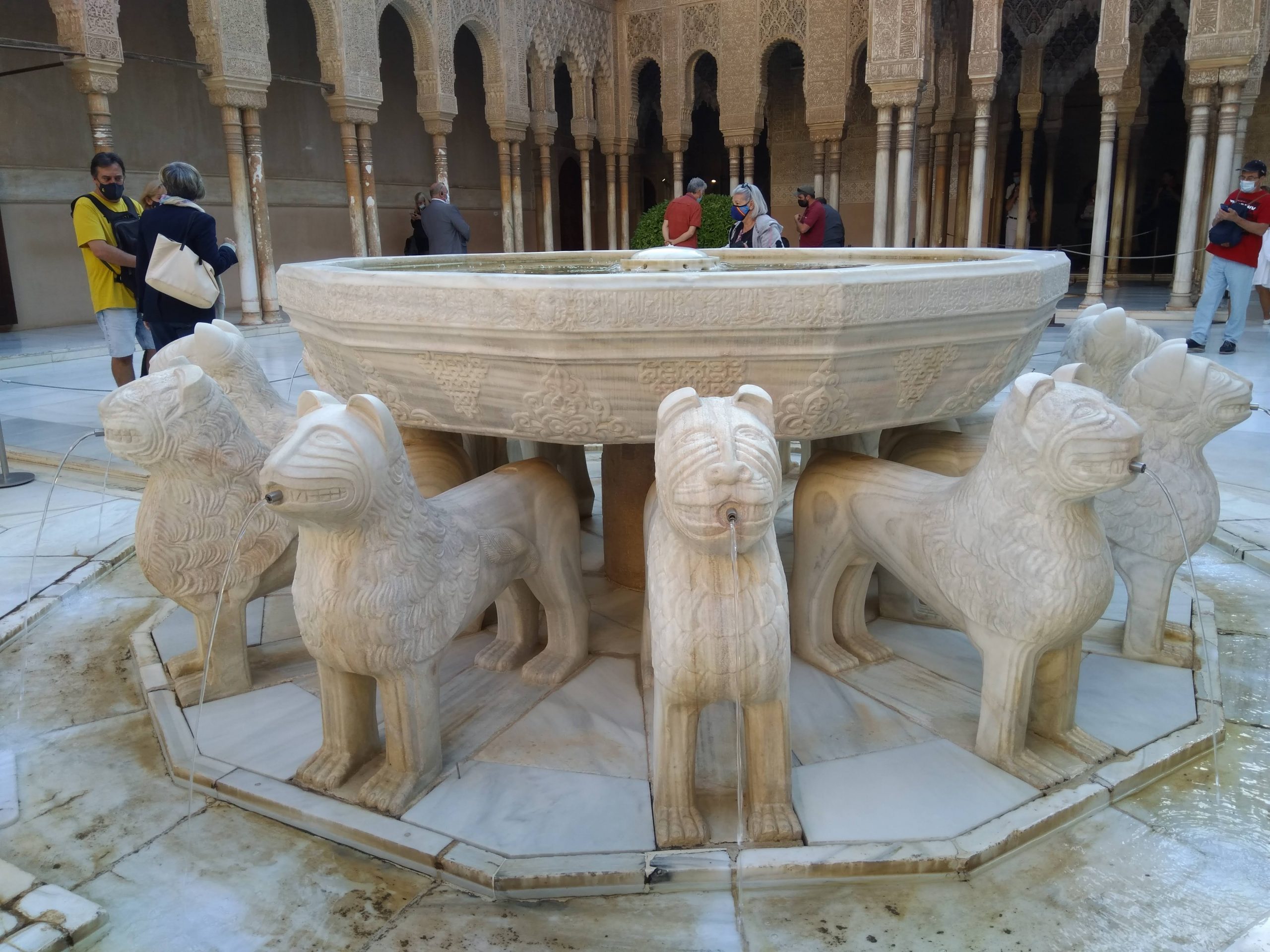 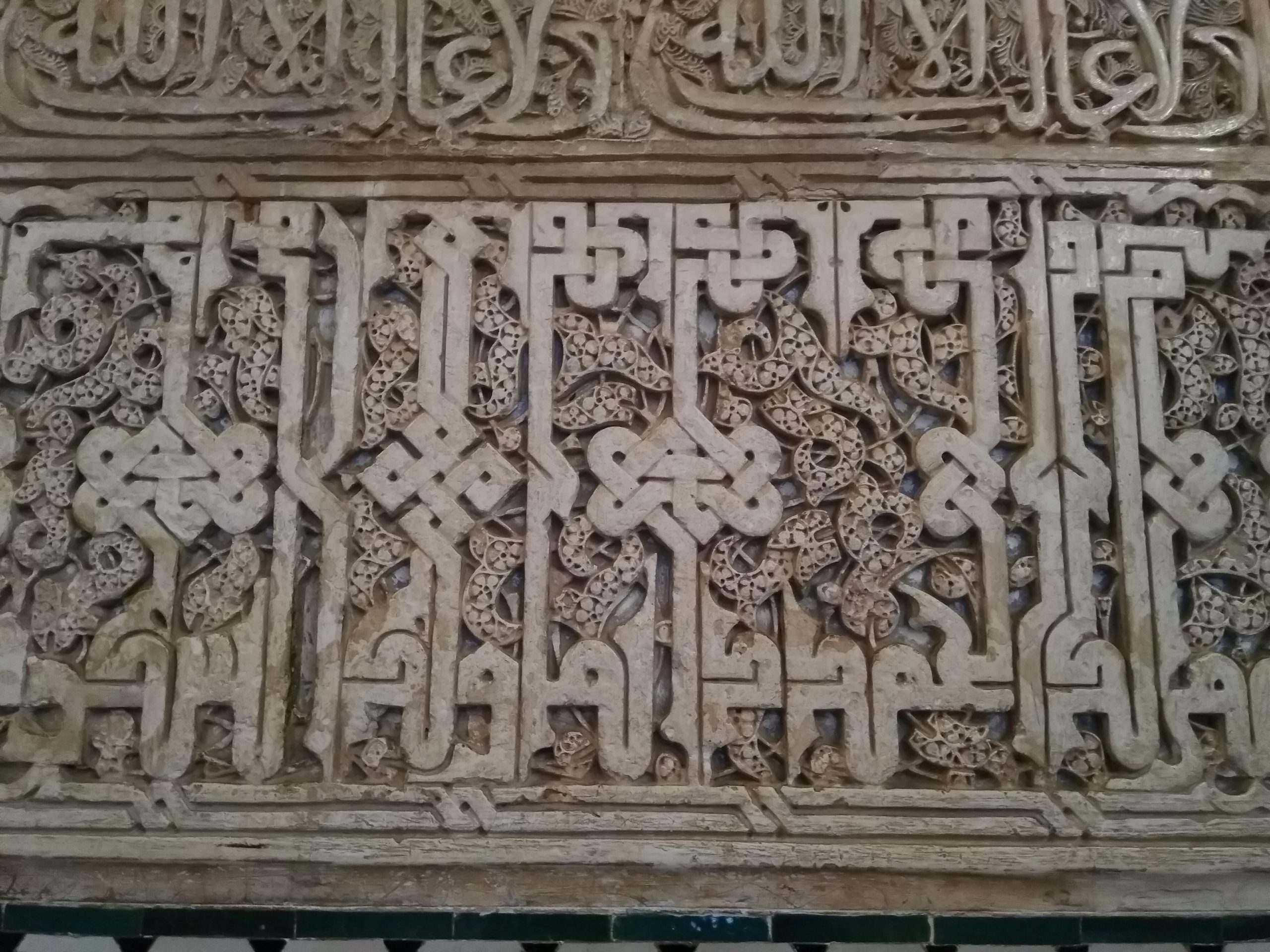 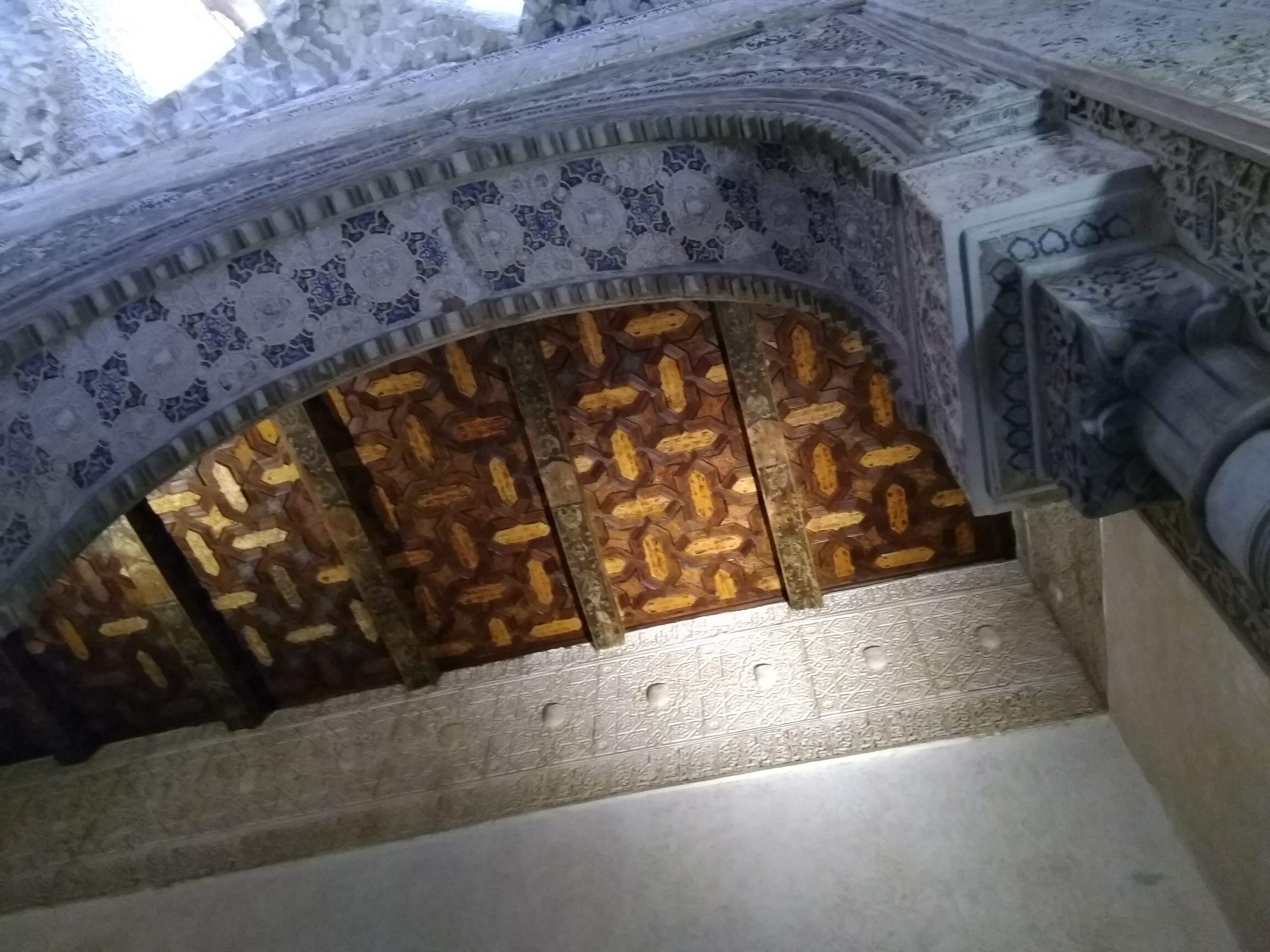 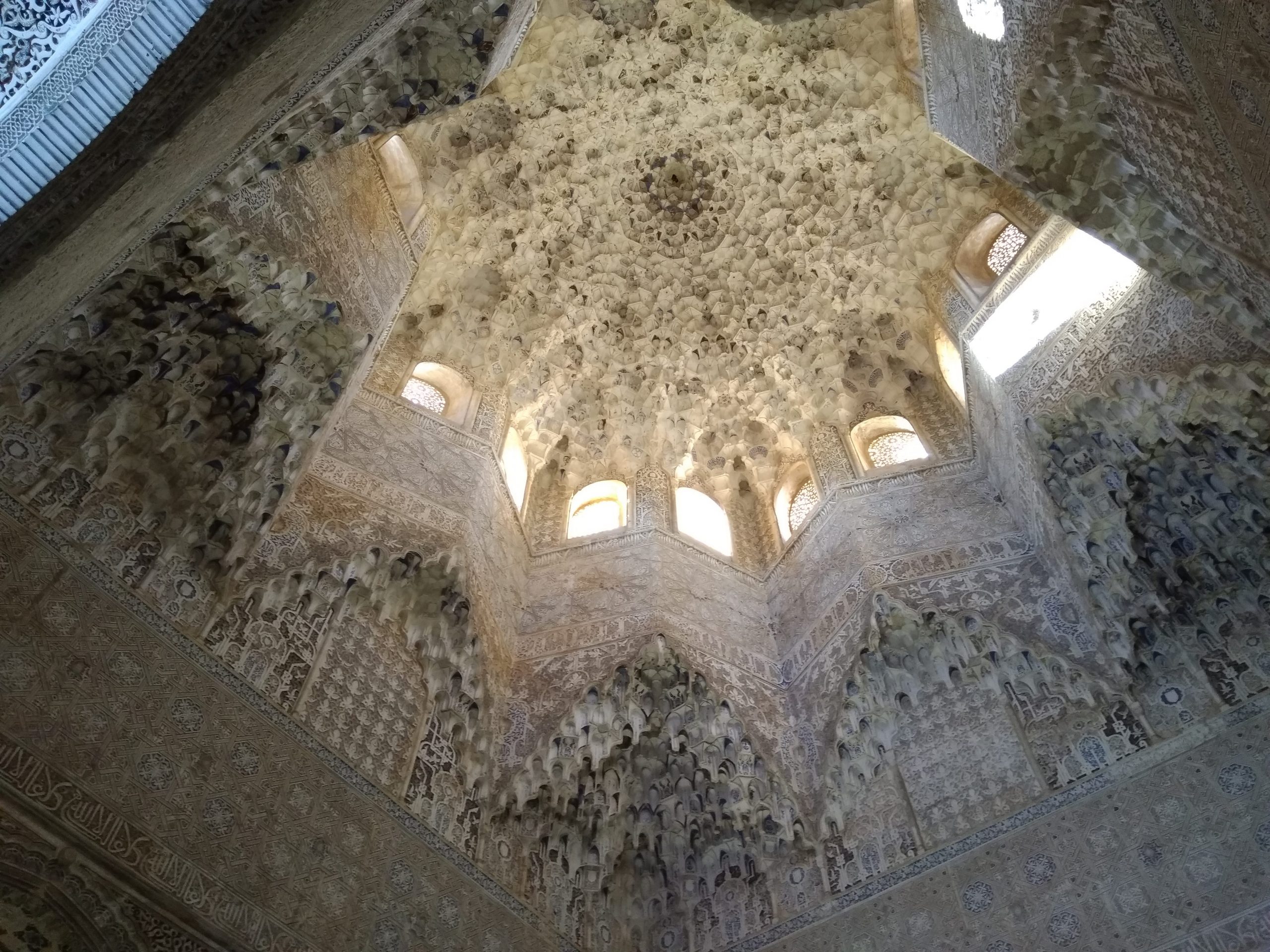 The origin of the name of Granada

"Morgana is Anglo/Dutch and lives in the Netherlands. She is a practising Gardnerian HPS. Over the years, she has facilitated a variety of Wiccan groups. She is co-editor of the international and bilingual "Wiccan Rede" magazine, which was launched in 1980 and is coordinator of Silver Circle, a Wiccan network in the Netherlands. As International Coordinator for PFI she travels extensively giving talks and workshops about Wicca and Paganism."
Bekijk alle berichten van Morgana →
Dit bericht is geplaatst in English articles met de tags Alhambra, Andalucia, Granada, pomegranate, Spain. Bookmark de permalink.
We use cookies on our website to give you the most relevant experience by remembering your preferences and repeat visits. By clicking “Accept All”, you consent to the use of ALL the cookies. However, you may visit "Cookie Settings" to provide a controlled consent.
Cookie SettingsAccept All
Manage consent