Witches Do It In A Magical Circle

Sacred space is place that is experienced as sacred.  In many religions it is a permanent structure such as a church, a mosque, a druid’s grove or a temple.  The place is seen as sacred, as numinous and special, a suitable and worthy place where the Divine can be experienced.  These places are often made sacred through certain rites and ritual; a form of magic which involves the manipulation of meaning to transform phenomenal reality.  The rites lead to experiencing the church or temple as sacred, not just for the original conductors of the rite, but for all who work in that space thereafter.

Witchcraft differs from other religious and spiritual traditions in that it does not have any permanent sacred spaces.  There are no permanent temples in the initiatory Craft, perhaps because it is a spiritual tradition where the focus of the experience of the Divine is through life and death, where there is no dualism between the sacred and the profane, therefore there is no need for a permanent temple.  In the Craft the sacred space is declared at every meeting, wherever and whenever the coven meets. 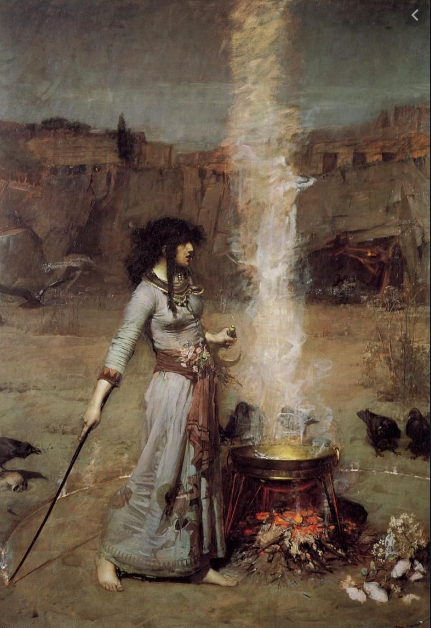 This sacred space is declared when the circle is cast by the High Priestess with the sword or her athame and is magical, psychological and mythological in character.  It is psychological, firstly, as it is visualised by and experienced by the participants as the sphere is formed about them.  It is ‘experienced as’ by the mind through an act of active imagination.  Secondly, the setting up of the sacred space in the Craft prepares the Witches for the rite in which they are to participate.  For example, a church is laid out to either assault the senses such as in the stain glass, incense, bells, candles, crucifixes and robes of the priest in Catholicism, or the in the stark whitewash and lack of symbolism of the Methodists.  The symbolism, the bells and smells of the Catholic or the austerity stemming from the suspicion of idolatry of the Protestant both work to put the worshipper into a worshipful and receptive state of mind.

Likewise, the words, gestures, incense, candle light and being skyclad involved in the casting of the circle puts the Witches into the state of mind where magic can occur.  If the same method of casting is used each time (as in Initiatory Craft), then expectation and classical conditioning (like Pavlov’s dogs) combine to create the appropriate state of mind with little effort on the part of the Witch.   Vivianne Crowley (1989) tells us of one priestess who says, “I only need to hear the swish of a broom and I am in an altered state of consciousness”.  I can confirm from experience that that this is certainly the case.  During the set up of our rituals and the casting of the circle, after eighteen years of working in the same coven, I automatically slip into ritual consciousness.

The circle is also mythological and is full of symbolism.  The circle can relate to the four classical elements, air, fire, water and earth.  It can relate to the phases of the moon, waxing, full, waning and dark.  It can of course relate to the turning seasons and magical tides of the wheel of the year and to the stages of life such as youth, maturity, old age and death.  To my mind it can relate to stages in the hero’s journey, the mono-myth described by Professor Joseph Campbell in his book, The Hero with a Thousand faces. This is the journey of the hero, female or male (in our case the mystic), who goes out into the metaphorical wilderness, fairy land, the world of adventure.  It is here that the mystic has their adventure/experience, attaining gnosis (spiritual knowledge), before returning to everyday life where they have to integrate that knowledge into their everyday lives.  The failed hero or mystic is not able to do this, often englamoured they become stuck in the adventure world and so spiritually perish.

The circle, mythologically speaking, is out of time.  It is also all time, all the seasons, all the stages of life, all parts of the hero’s quest and so paradoxically, which can happen in myth, is all time and at the same time it is out of time.  The circle is experienced as the mythological every-when, fairy land and eternity where the tick, tick, tick of time does not pass; there is no past, present or future.  Mythologically speaking this is the mystical state.  It is in this space were we experience mythologically, rather than logically.  We participate in mythology, finding meaning and engaging with the mysteries.

It acts as a mythological circle that psychologically contains the emotion and meaning.  It represents the keeping away of thoughts and feeling not required for the ritual.  These are the daily round of duties and thoughts which might include stresses about work, money, or whether we have left the cooker on.  They are outside the circle while we and the ritual we are participating in are on the inside.  It is a psychological and mythological barrier between the emotions, thoughts and meaning necessary for the job at hand, and those that would distract us from our purpose.  So the circle acts as a boundary and protection of meaning containing the emotional power we raise.

To conclude it is both a mythological space where we engage with and act mythologically and a psychological boundary.  However, while this requires imagination, visualisation and concentration; it is not the same thing as play acting.  Rather it is ‘seeing as’, making and experiencing profound meaning rather than simply make believe.  This meaning can be allegorical but it is also archetypal in that it related to our deep feelings and patterns of experience which are invoked by what is fundamentally important in life.

Rhys, along with his wife Martika, is a member of a rural Gardnerian coven in the middle of Suffolk. He has a Masters degree in philosophy and works as a history and humanities teacher. He is interested in wildlife, travel, wine making (with mixed results – just ask the coven), philosophy, field archery and reading.
Bekijk alle berichten van Rhys Chisnall →
Dit bericht is geplaatst in English articles met de tags Craft, initiatory Wicca, magical circle. Bookmark de permalink.
We use cookies on our website to give you the most relevant experience by remembering your preferences and repeat visits. By clicking “Accept All”, you consent to the use of ALL the cookies. However, you may visit "Cookie Settings" to provide a controlled consent.
Cookie SettingsAccept All
Manage consent