Review: The Way of the Odin Brotherhood 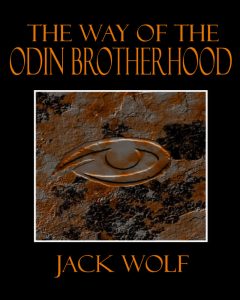 ‘Would you know more?’

It began with a simple question, sent from an unknown e-mail address, and it kindled the fires of a quest that would take him on a journey of discovery spanning several years; a journey that would lead him closer to the enigmatic secret society known as the Odin Brotherhood.

A cover text like that could suggest that the story is an adventure novel, a kind of ‘whodunnit’, a tale of mystery – in any case: fiction. And reading the book, I am still not fully convinced otherwise. But we know the publisher, we have reviewed books of them more often (and often more quick!). They publish serious books on ‘occultural’ subjects. So this must be non-fiction. And if that is true, this volume reveals a hidden story, until now only known through ‘The Odin Brotherhood’ by Mark Mirabello, first published in 1992, and now there’s a 6th print with 50 new pages. Mirabello is a professor of history at Shawnee State University in Ohio, and author of several other books. He too was contacted by an anonymous adept of Odin.

Called an “occult religion” for adepts, a “creed of iron” for warriors, and a “secret society” for higher men and women who value “knowledge, freedom and power,” the Odin Brotherhood honors the gods and goddesses of the Norse pantheon.
This non-fiction book details the legends, the rituals, and the Mysteries of an ancient and enigmatic movement.

So probably the book by Jack Wolf is non-fiction too. Still it is exciting to read, and I won’t give away the plot. But it made me wonder: if an ancient brotherhood existed for centuries in silence, hidden, underground, why stand up now? Some clues to answer that question are given, and the story of Gerald Gardner publishing about Wicca is not unlike this story. And people question the origins of Wicca too.

The philosophy of the Odin Brotherhood seems to be okay: they have included women since their origin, they are pagan in a familiar sense of the word. And “The brotherhood has distanced itself from the racism that has infected Norse beliefs in the twentieth century and eschews the idea that there are either chosen peoples or master races.” They are very keen on knowledge and the spreading of knowledge. And yet, there is a hint of violence that I do not like. On the website – peculiar for a secret society to have one, but maybe that’s because other groups could claim they are the genuine Brotherhood – I read “The Brotherhood glorifies strength. We assert that it is ‘only by becoming stronger that a man can realize his divinity’.” What does that mean? Is it just character building?

For people interested in the Northern Tradition, it is interesting literature. And it still is a fascinating adventure story.