TALES OF INDIA – Muziris, a spicy tale of temples and mysterious rituals – part 2

Without doubt the Bhagavathy Temple is one shrouded in mystery and well worth a visit. With Morgan’s book under your arm it becomes even more intriguing. Perhaps this really was the original site of the Temple to Augustus? …

According to the Peutinger map the Temple to Augustus was close to what is now the area of Kodungallur or the ancient port of Muziris. However, the Romans were not the only explorers in this area. What do we know about Muziris?

Here is a short documentary on Muziris: https://www.muzirisheritage.org/muziris-film.php

There was an interesting article about Muziris in the Guardian, August 10, 2016 – “Lost cities #3 – Muziris: did black pepper cause the demise of India’s ancient port?” in which the question of the location of Muziris is discussed. “In the first century BC it was one of India’s most important trading ports, whose exports – especially black pepper – kept even mighty Rome in debt. But have archaeologists really found the site of Muziris, and why did it drop off the map?”

I visited the Museum of Excavation at Pattanam where I could read about the progress of the excavations.

“The Pattanam excavations were the first ever multi-disciplinary excavations undertaken in Kerala State. The main objective of the excavation was to search for archaeological evidence that would help to locate/identify an early historic urban settlement and the ancient Indo-Roman port of Muziris or Musiri on the Malabar Coast. Many important findings were obtained like human bones, storage jars, a gold ornament, glass beads, stone beads, utilitarian objects made of stone, copper and iron, typical pottery, early Chera coins, brick wall, brick platform, ring well, wharf with bollards, and a six-meter-long wooden canoe parallel to the wharf structure about 2.5 m. below surface level. The structures indicate a vast ‘urban’ settlement.

The excavations suggest that the site was first occupied by the indigenous “Megalithic” (Iron Age) people, followed by the Roman contact in the Early Historic Period. It appears that the site was continuously occupied at least from the 2nd century BC to the 10th century AD. The maritime contacts of this region during the Early Historic Period seem to have been extensive as evidenced by the large number of Roman amphora shreds, a few terra sigillata shreds, Sassanian, Yemenite and other West Asian potteries. Proliferation of roulette ware probably made in the Bengal-Gangetic region signifies the site’s importance in the pan Indian context as well. Located about one and a half kilometers from Kodungallur-North Paravur route the bulk of the archaeological remains in the area is buried, unexplored and untouched.” 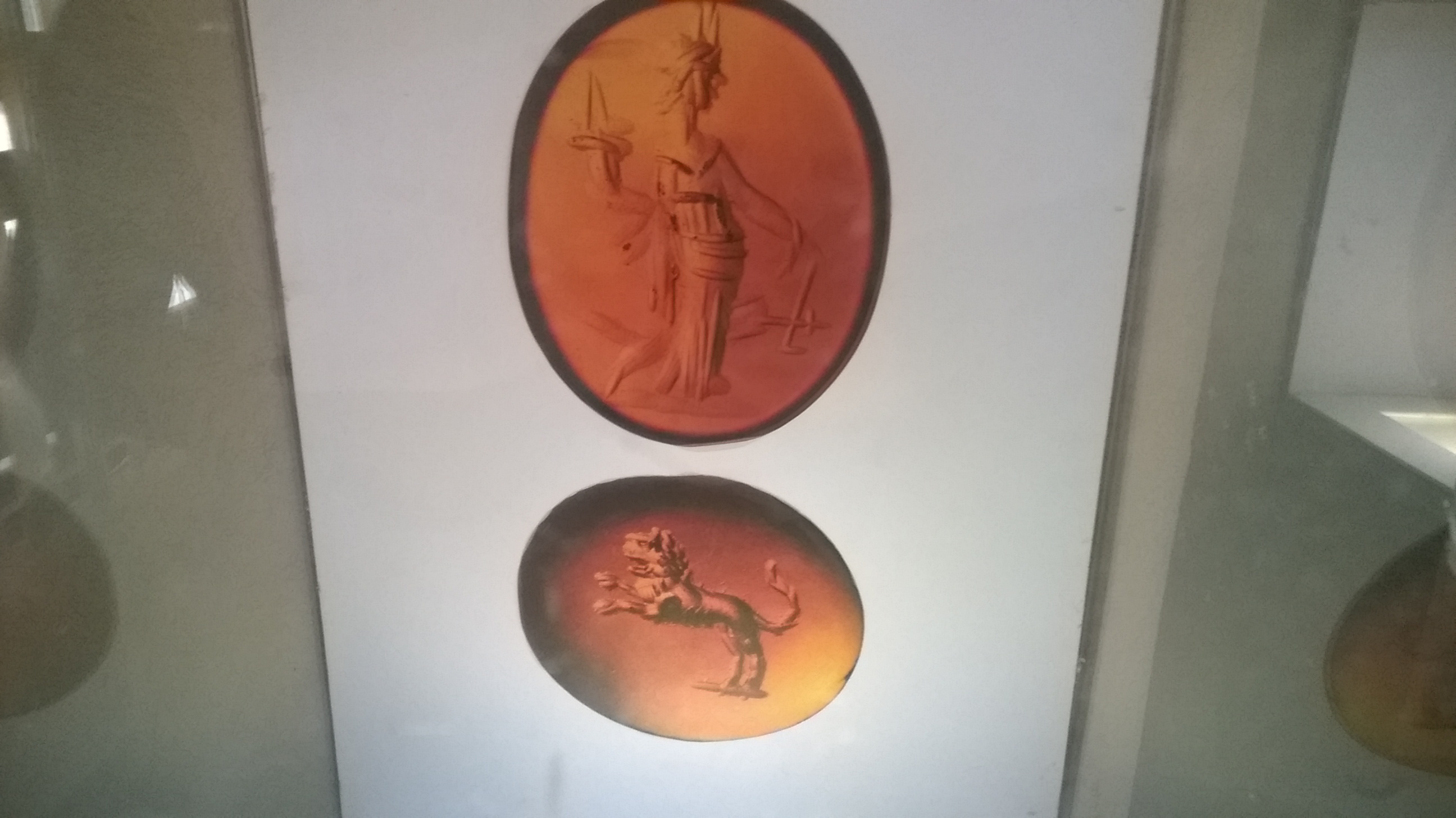 (The Fortuna Intaglio, A carnelian intaglio, with a human figure etched on it, measures about 1.5 x 1.0 cm. The figure is etched on one side of a thin oval-shaped carnelian piece that is slightly curved or convex. The figure is placed vertically on the oval piece. It was recovered from locus 13 of the Early Historic sediment-debris layer of Trench P T14 XLIII at a depth of 130 – 140 cm. Stratigraphically, it can be dated to the early centuries CE. The human figure etched on it with striking perfection is the Greek Goddess Tyche or the Greek Goddess Tyche or the Roman Goddess Fortuna – (photo Morgana, Jan 2017).

I was particularly interested in the ‘Megalithic’ findings. “As evidenced by the excavation finds and post excavation studies, Pattanam has a life history stretching over 3000 years. However, most of the significant finds are dated from the 3rd century BCE to the 5th century CE.” (Catalogue, 2014)

I was hoping to find evidence of statuettes similar to those found in the Middle East – Iraq, Syria and so on. However, it was at the Kerala Folk Museum where I saw some interesting objects which had been excavated in the Kodungallur area.

In several dusty glass cases I saw these: 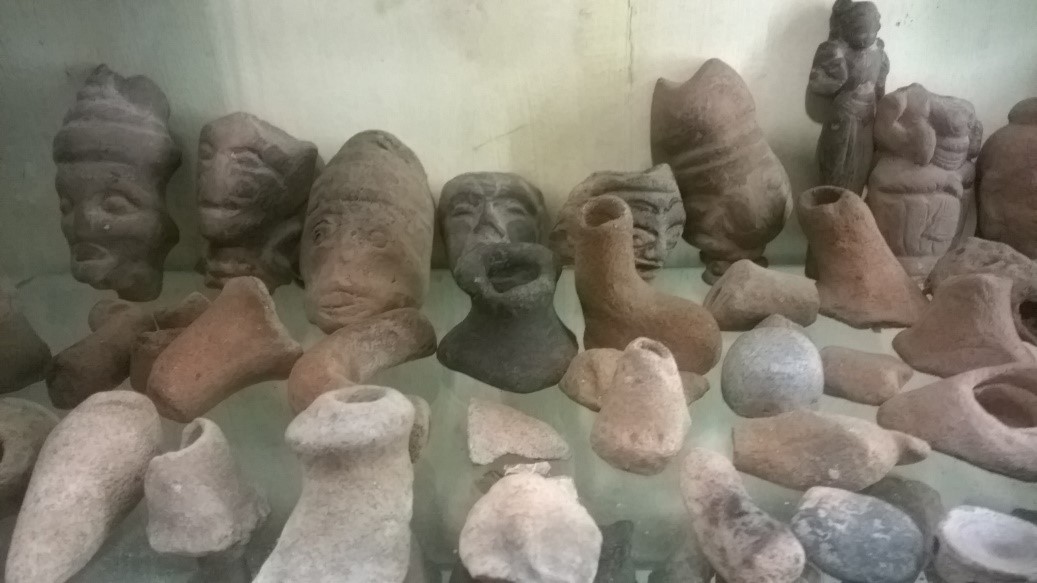 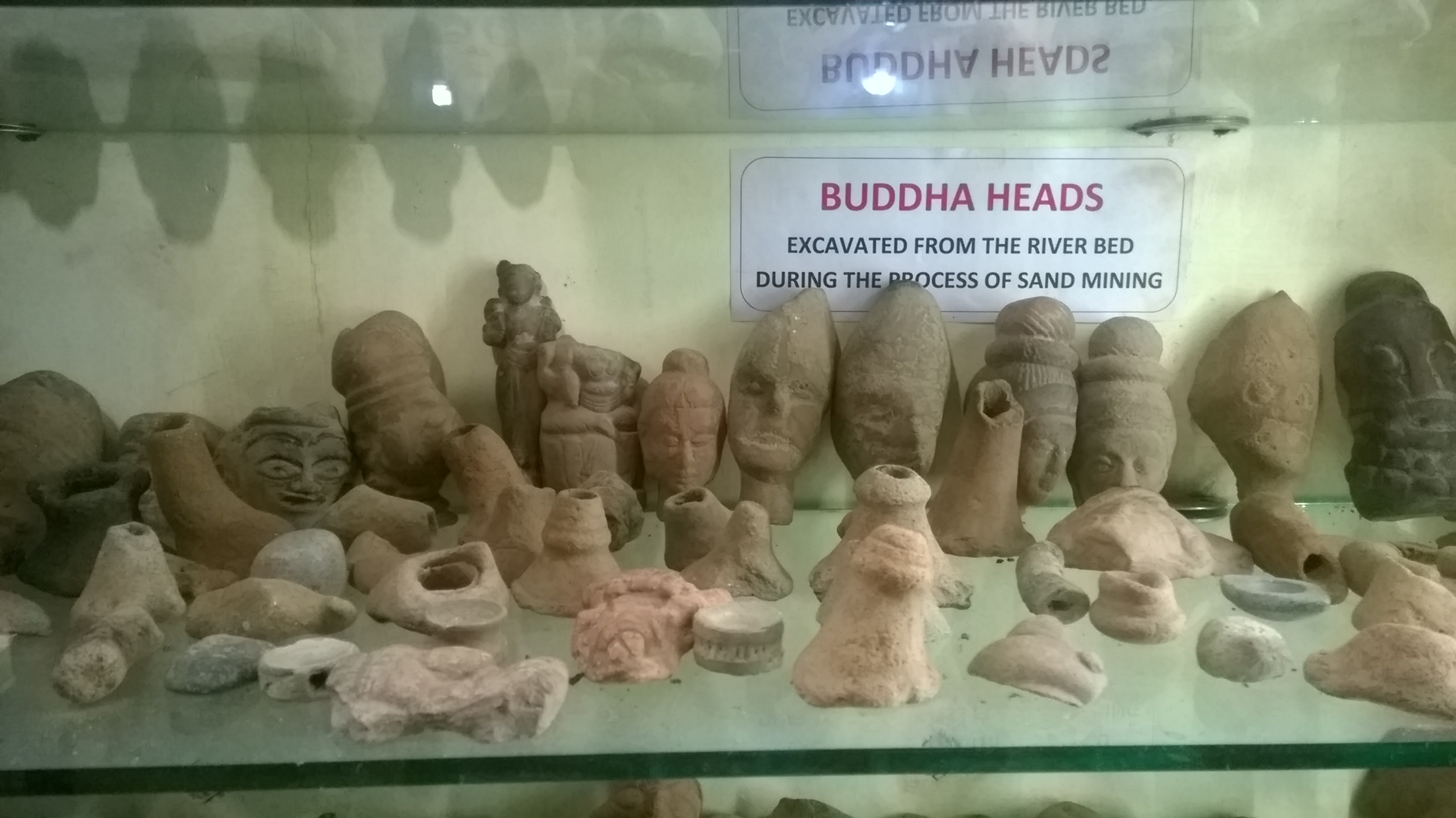 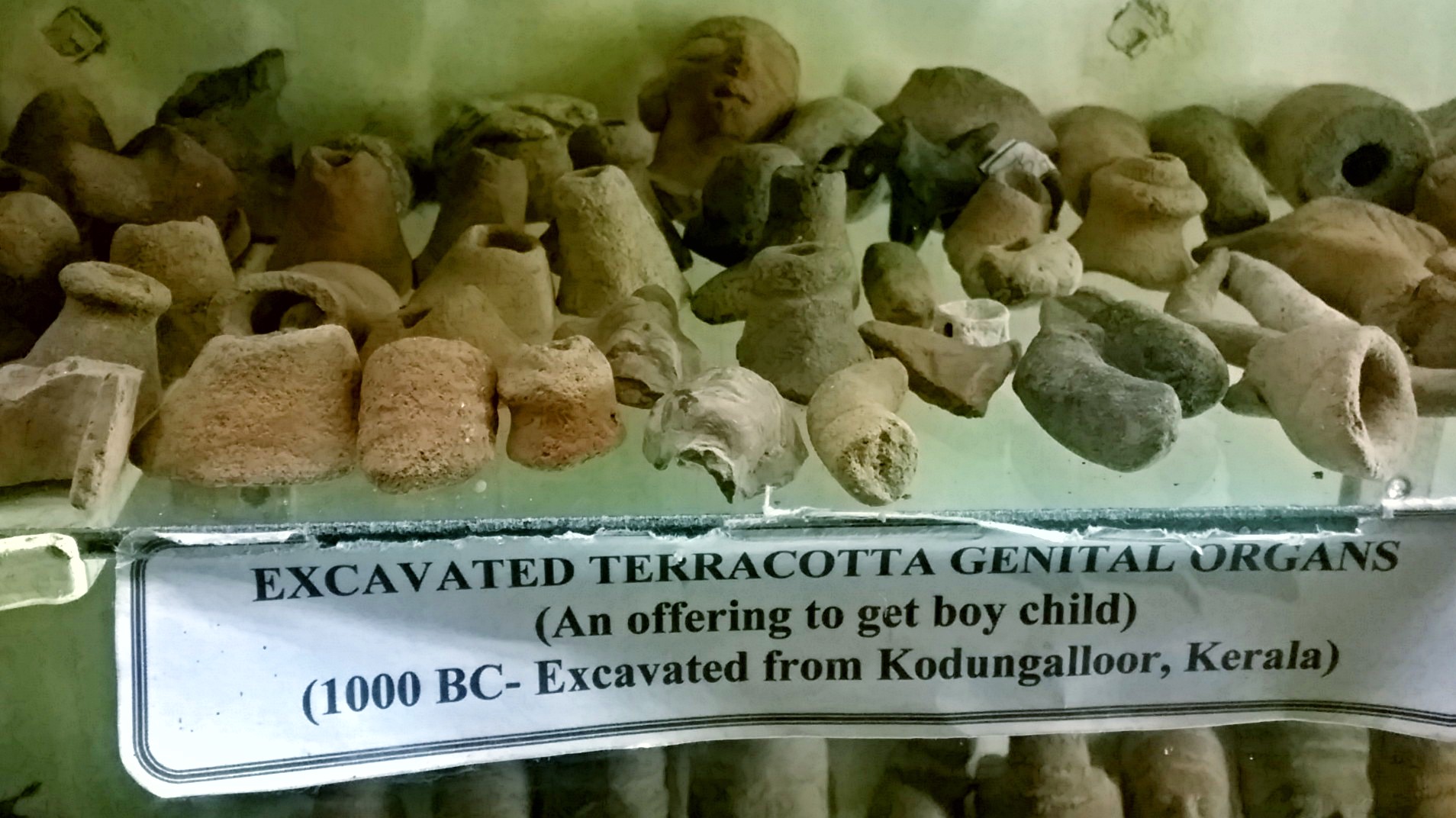 “.. terracotta genital organs … an offering to get a boy child…” and indeed there were several objects which looked like the tip of a penis. Although I have seen amulets in the form of a penis before – the Romans are famous for them – I had never seen ’just’ the tip or head of the penis (Glans penis).

I showed these photos to Chris Morgan and he too was baffled.

The Kerala Folk Museum was amazing and certainly worth a visit if you are interested in the folk dances of the region. The major dance form is the Kathakali. I attended an evening of the Kathakali dances in Fort Kochi. Before the dances one can see how the make-up is applied. Here are some impressions of the dance:

The dances are based on the stories from the Indian Epic, the Mahabharata. This particular evening it was the story of “The Killing of Kichaka” 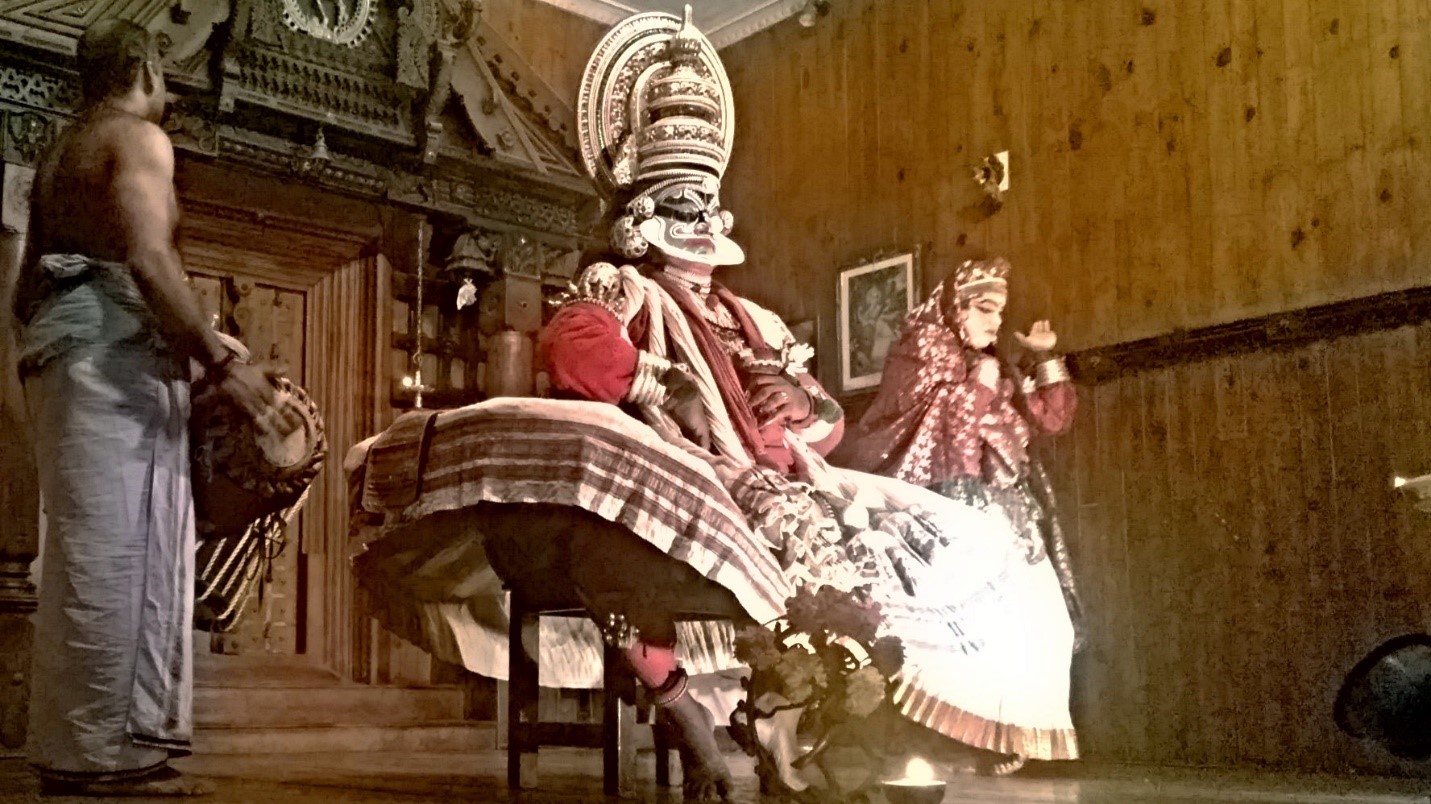 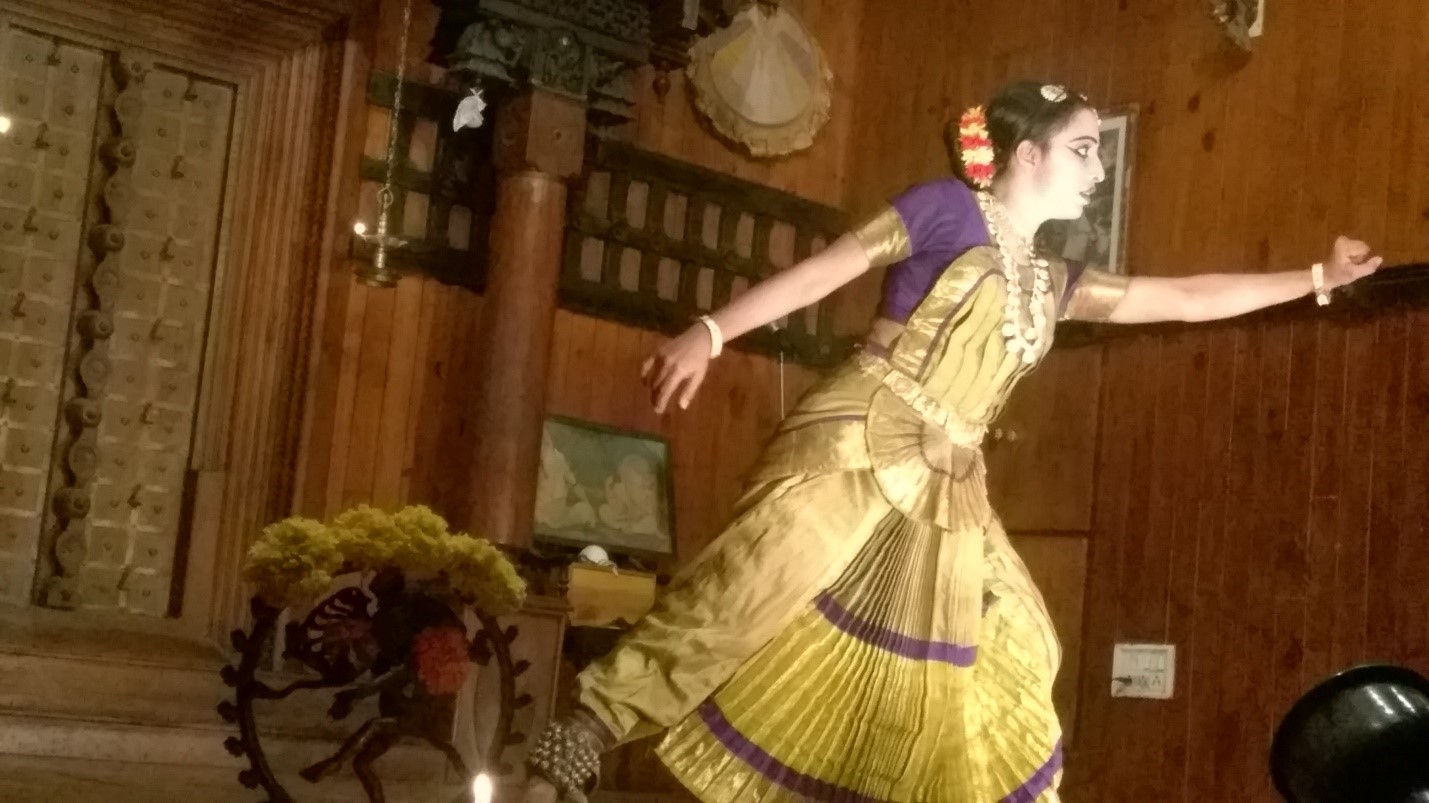 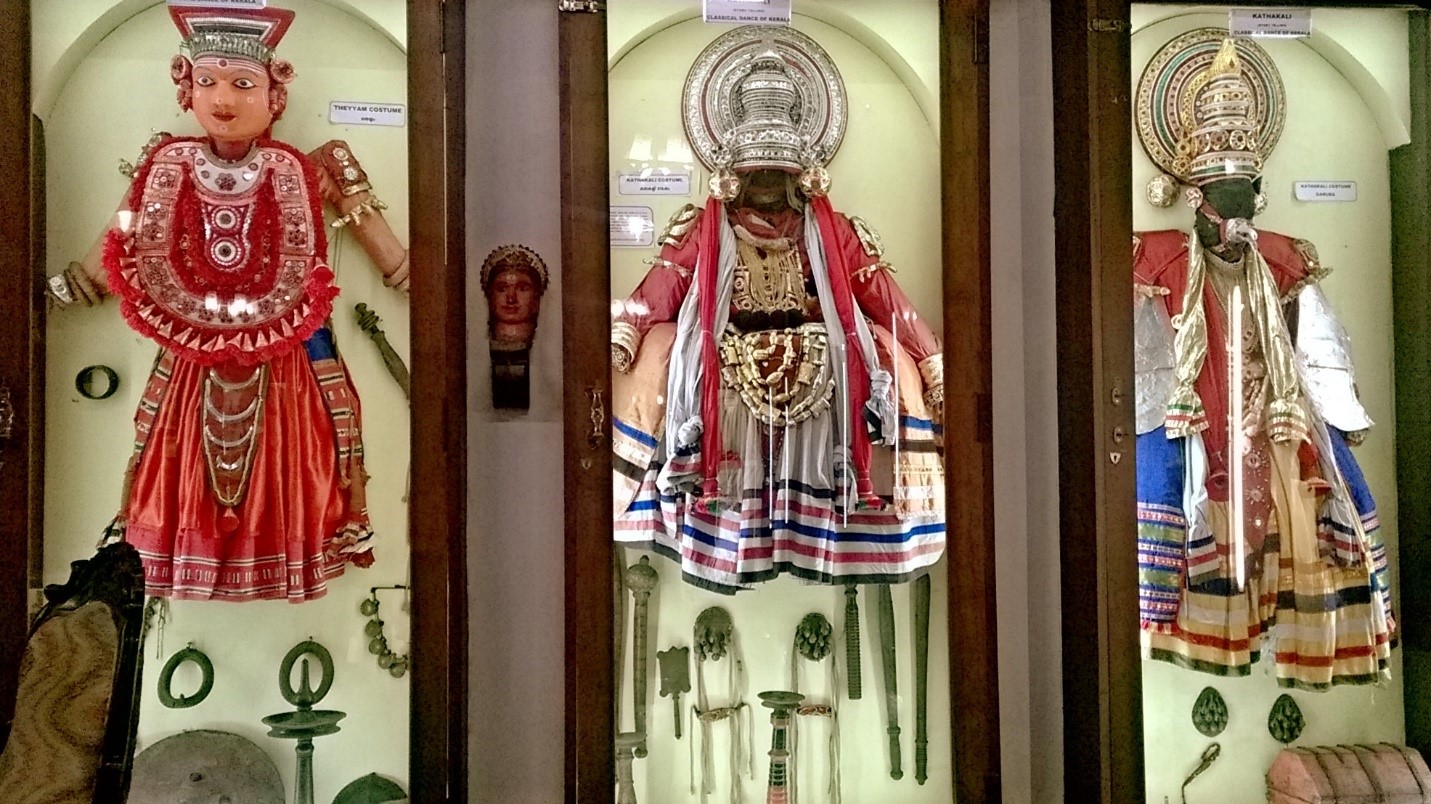 A couple of short videos I made during the evening of Kathakali/Classical Indian dances in Fort Kochi, Kerala, Janaury 2017

One of the other things which thrilled me at the Folklore Museum was the following. Before visiting the museum, I had seen several souvenir shops in Fort Kochi. As part of the payment for the tuk-tuk you often get ‘treated’ to a visit to the Silk emporium etc. One day I ended up in such a situation – I was interested in carpets so didn’t mind looking around. On this occasion I also saw some beautiful daggers/ or Indonesian style Kris, or Keris. One caught my eye – a small silver one in the shape of a crescent. It looked like a woman’s Kris.  The tip pf the blade had an incision, the likes of which I had never seen before.

Imagine my delight then when at the Folklore museum I saw a similar Kris, but it was listed as a stylus for writing. Of course, the tip of the Kris I had seen in Fort Kochi looked just like the old pen nibs we used at school – using ink. 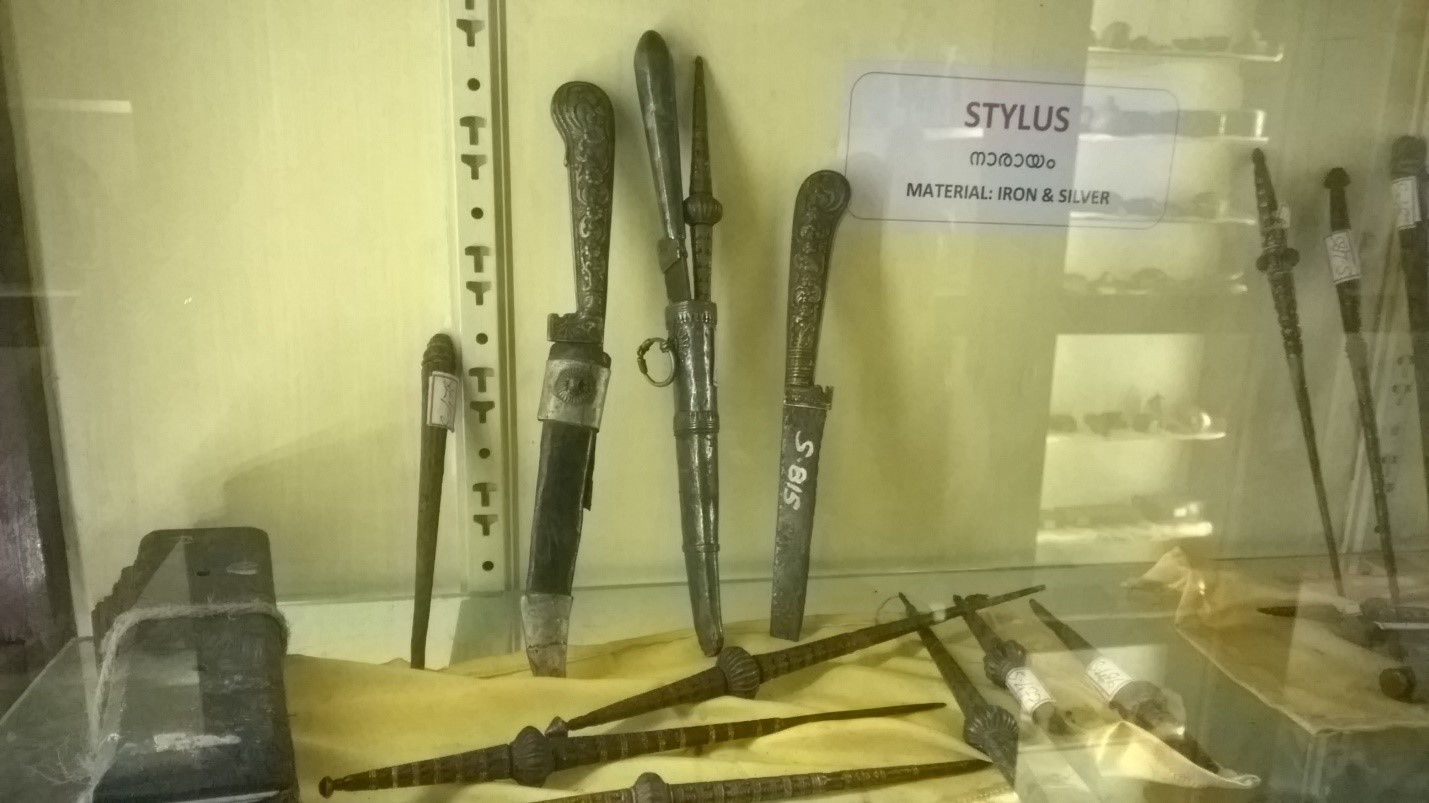 It also occurred to me that Gerald Gardner must have been aware of the tip of the Kris, as a stylus. In his book “Keris and Other Malay Weapons” he also mentions the ‘poisoned keris’. “The old European authors speak of the keris as a poisoned weapon. In modern times the keris is certainly not poisoned, although many types of keris, which were made small to economise iron, were poisoned; but as the keris got bigger it was found that it was deadly enough in itself. The drawback to use of poison is that has to be continually renewed. Malay vegetable poisons are all wild and difficult to obtain. When the Malays were a village people and their weapon were small, poison was necessary, and they obtained it. When the towns were formed, they could not get enough of the poison and found that with bigger and more efficient weapons they did not need it; but the poisons were still available and were used occasionally. D’Albuquerque tells us that when attacking Malacca he lost many men from poisoned arrows and I think there is a basis for both European and Malay stories of poisoned keris.”

It also occurred to me that although the Athame – the Witches Blade – is not generally used for drawing blood, in the same fashion as the stylus it could be used for writing in blood.

Before leaving the Muziris region I also visited – The Paravur Synagogue: 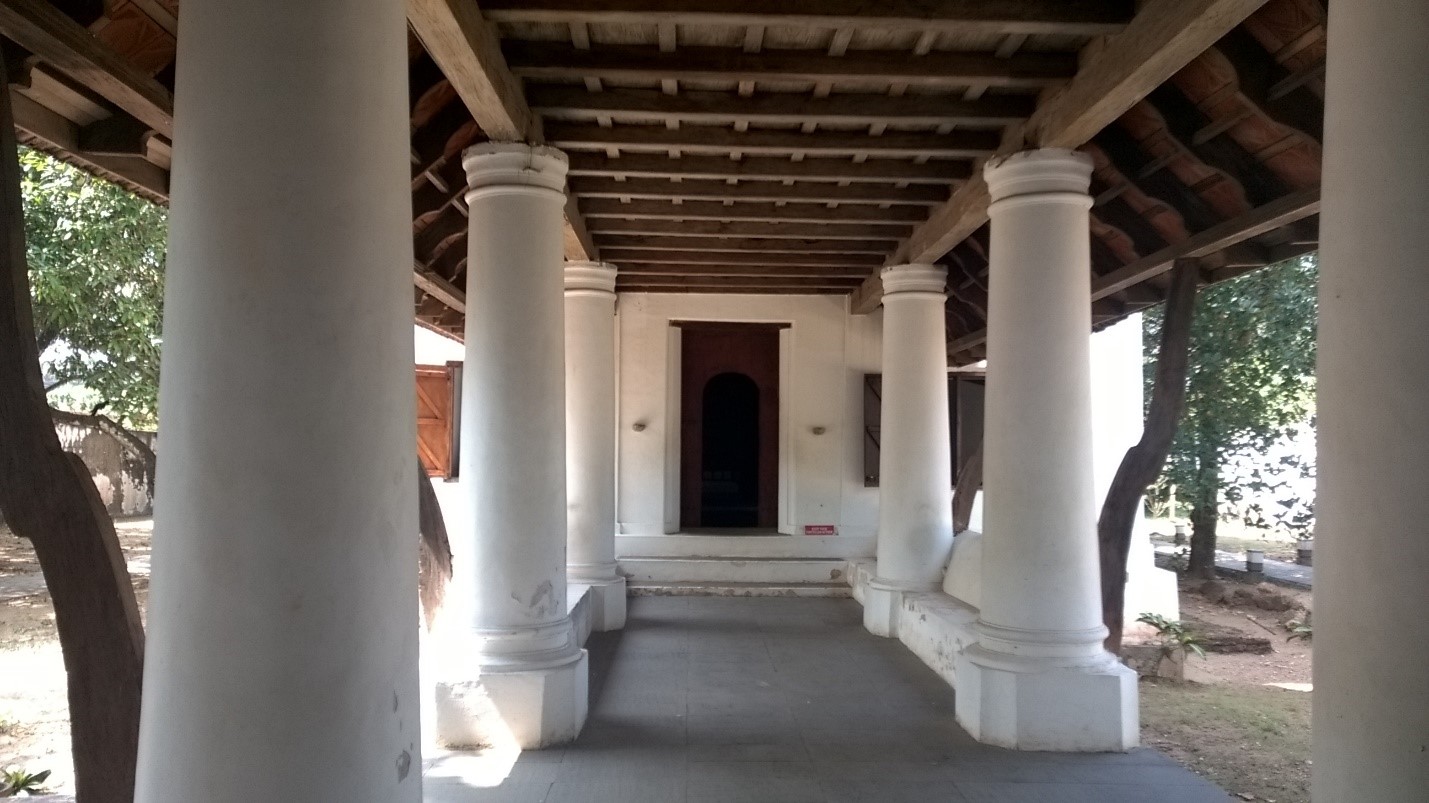 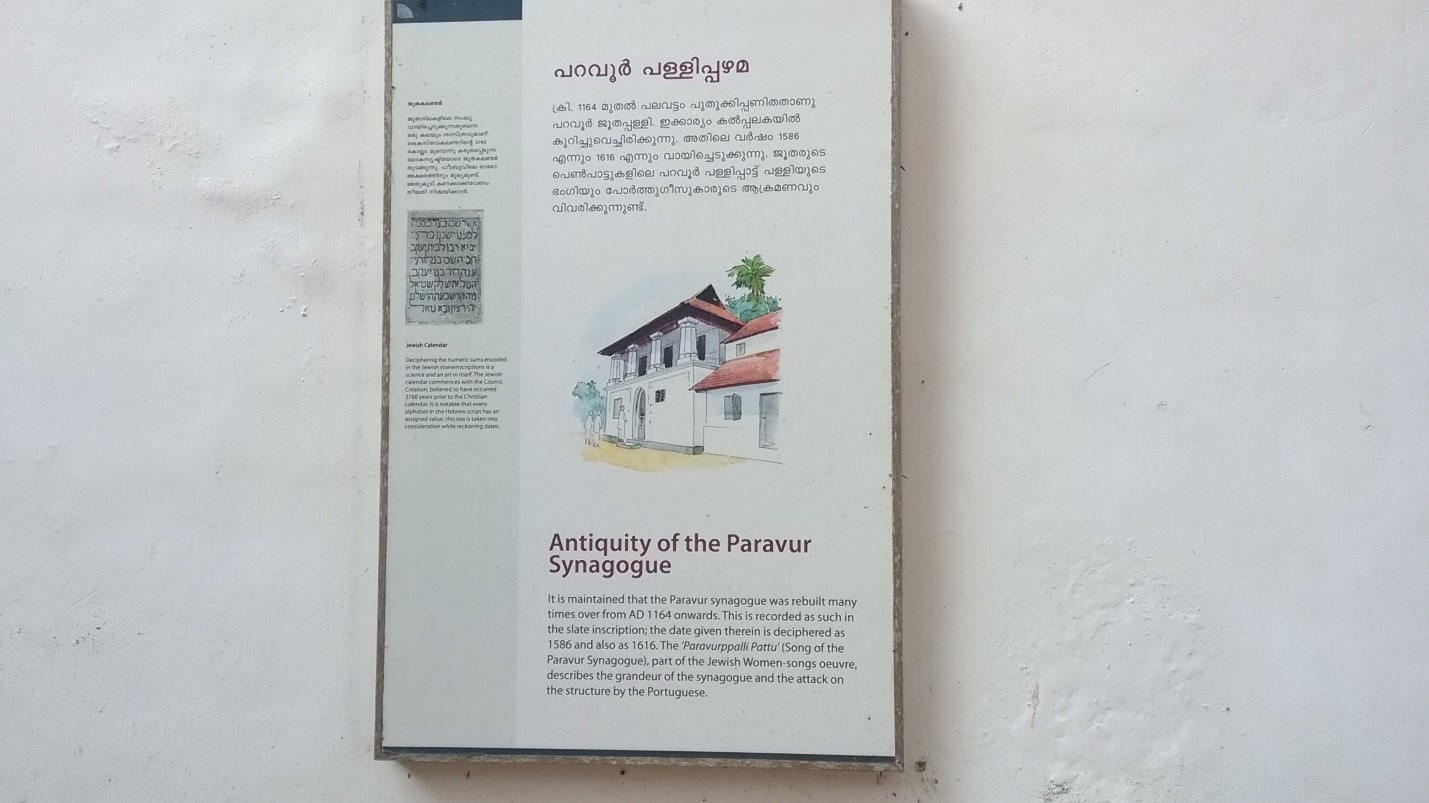 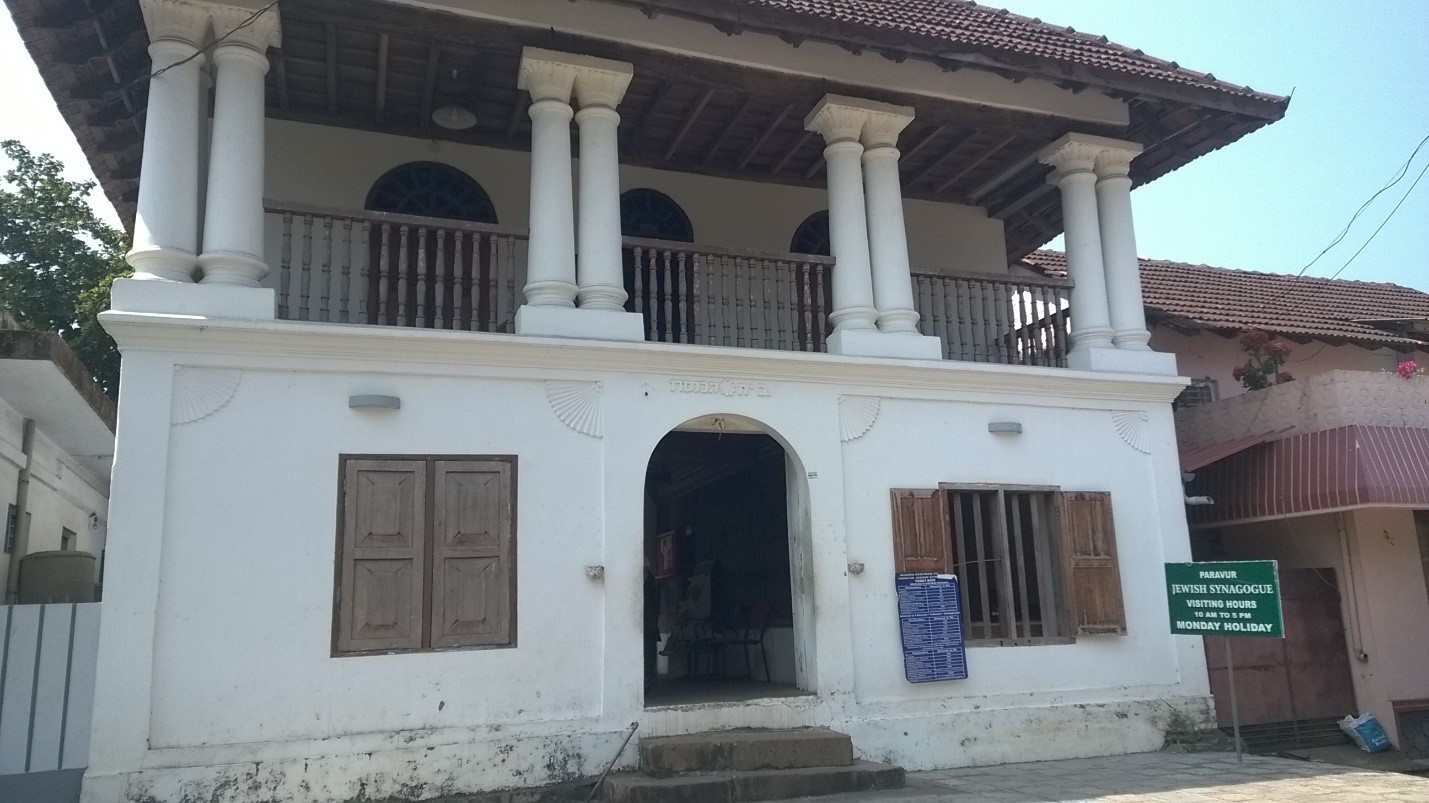 “The Paravur Synagogue is the most expansive and complete among synagogues in Kerala. It is a construction that has several parts that are linked to each other in specific ways. It consists of a porch with two rooms, very spacious front yard, long corridor, huge doors and stairs made of wood, whitewashed walls built with laterite blocks and a mixture of lime, and the wooden chamber with intricate carvings. The influence of Kerala style is evident in the special seats designed for females in the second floor, the hanging lamps that decorate the prayer room etc. The shape of the fan on the front wall of the prayer hall resembles Portuguese style. Found on the erstwhile Jewish street in Paravur, this Synagogue was built in 1615. It is one among the largest surviving synagogues in Kerala. The building is located in the former Jewish Street of the Paravur region. It served as the place of worship for the Jewish community that settled very close to the Paravur Market.”

I also visited The Islamic History Museum which “has been set up in the Cheraman Juma Masjid complex. The mosque is considered to be the earliest in India and located towards the left of the Ernakulam-Guruvayoor NH 17 road and 2 km south of Kodungallur. It is said to have been built in 629 AD by Malik bin Dinar, during the lifetime of Muhammad.” 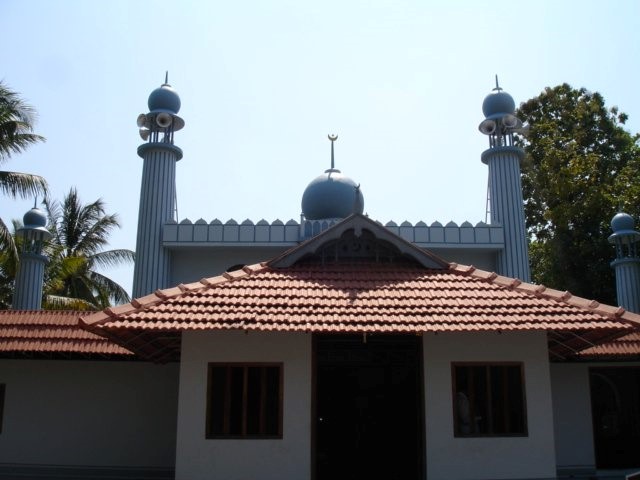 This was a Jain Temple I visited in Fort Kochi. Not quite as stunning as the one in Ootacamund but it still had an air of serenity normally associated with Jain temples. 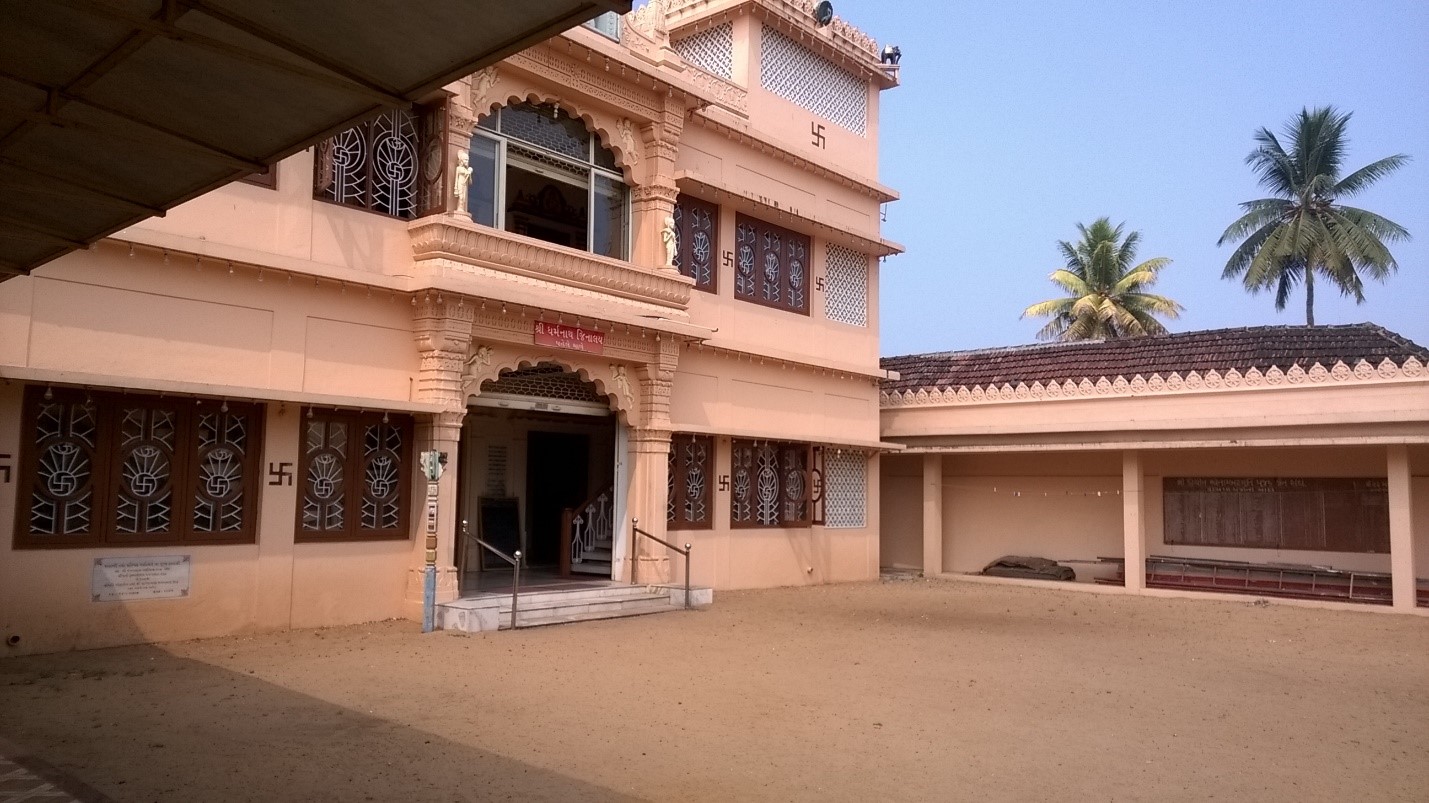 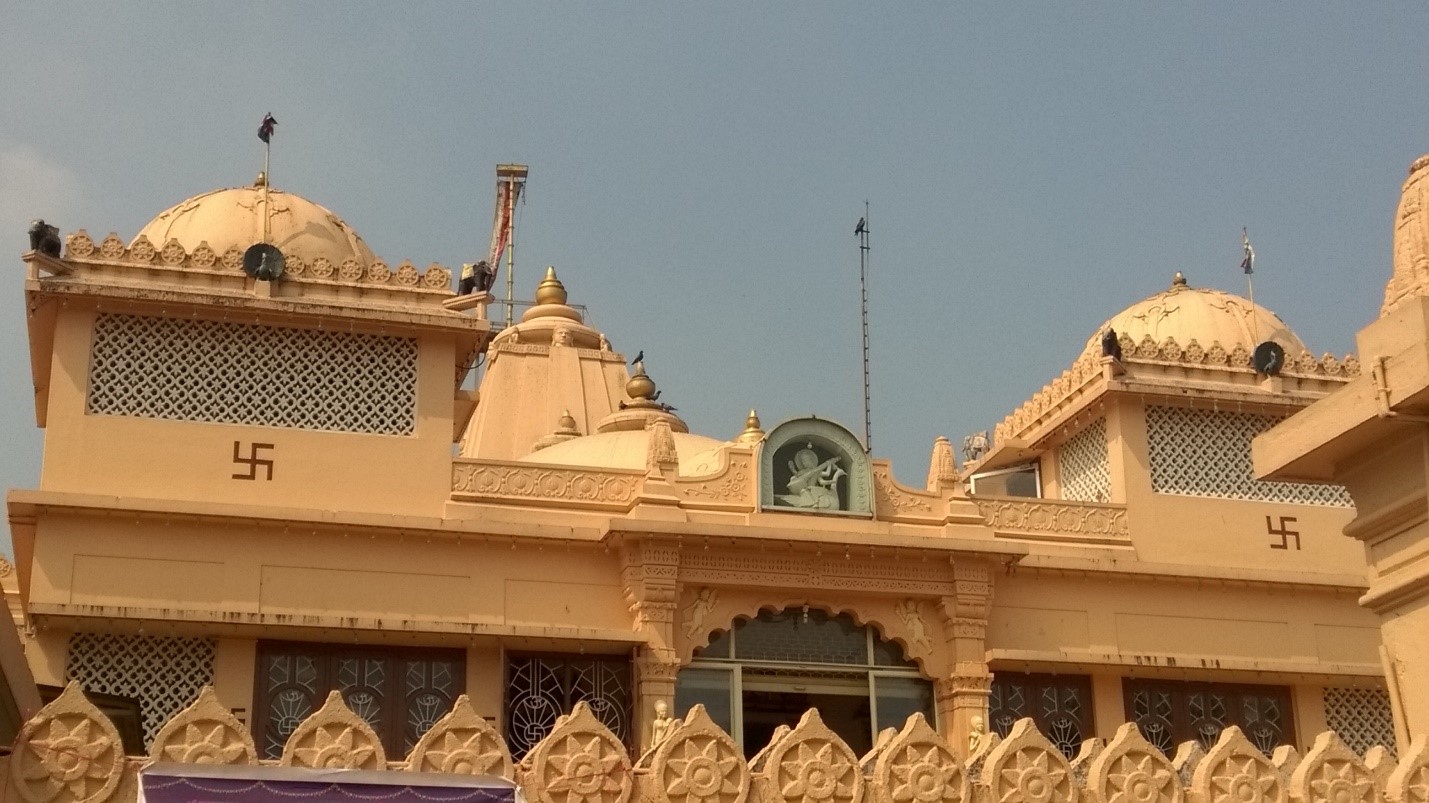 For an extensive look at the findings at the museum including The Fortuna Intaglio download the Pattanam Catalogue, 2014: http://www.nationalmuseumindia.gov.in/pdfs/Pattanam-Catalogue-Masterlayout-05122014.pdf

"Morgana is Anglo/Dutch and lives in the Netherlands. She is a practising Gardnerian HPS. Over the years, she has facilitated a variety of Wiccan groups. She is co-editor of the international and bilingual "Wiccan Rede" magazine, which was launched in 1980 and is coordinator of Silver Circle, a Wiccan network in the Netherlands. As International Coordinator for PFI she travels extensively giving talks and workshops about Wicca and Paganism."
Bekijk alle berichten van Morgana →
Dit bericht is geplaatst in English articles met de tags amulets, India, Kerala, Muziris, Romans. Bookmark de permalink.
We use cookies on our website to give you the most relevant experience by remembering your preferences and repeat visits. By clicking “Accept All”, you consent to the use of ALL the cookies. However, you may visit "Cookie Settings" to provide a controlled consent.
Cookie SettingsAccept All
Manage consent