TALES OF INDIA – Muziris, a spicy tale of temples and mysterious rituals – part 1

From the forest of Tamil Nadu and the Nilgiri Hills, my journey continued eastward towards the Malabar Coast and Kochi (formerly Cochin) and Fort Kochi in the state of Kerala.

Fort Kochi was a small fishing village certainly from the 7th century BCE until about the 14th when Kodungallur and the ancient port of Muziris were more or less destroyed by a giant tsunami in 1341. In the 16th century, it was the Portuguese who were granted trading rights by the Raja of Kochi (1503). He also gave them permission to build a fort. It was the Dutch who later destroyed the fort and settled in 1683, until 1795 when the British took control.  There are several historic sites in the area well worth visiting including the Chinese fishing nets and the St. Francis Church. It was here that the Portuguese explorer, Vasco da Gama died and was buried in 1524. However, his remains were moved to Lisbon 14 years later. 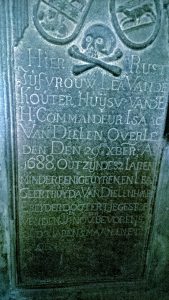 However, it was Muziris which intrigued me. A year or so earlier I had received a book to review called “Isis – Goddess of Egypt & India” by Chris Morgan / published Mandrake of Oxford. I was fascinated by Morgan’s theory of a secret Isis cult around Muziris, the ancient port. In fact, I was so intrigued that I decided to head for the Malabar Coast when planning my trip to South India and go and look for myself.

Now coincidentally (😊 ) in 2015 The Government of Kerala, department of Tourism, decided to launch the Muziris Heritage Project. While I was there, there was also a special exhibition called the “Muziris Bicentennial”. What timing! 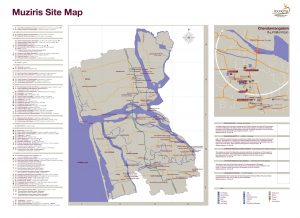 I decided to hire a taxi for the day and explained my plan to the driver. Although he was a local he hadn’t visited some of the places I mentioned. He was rather intrigued and ended up accompanying me to some of the sites. This proved to be invaluable since some of the places were locked up and he managed to find the curators who let us in. He was also able to translate which is always handy 😊

Leaving Fort Kochi, we headed north for Kodungallur and the Bhagavathy temple – see map. This is the temple which Chris Morgan believes is on the same spot as the Roman temple of Augustus. This temple has never been found but it is clearly marked on the Peutinger map. I saw a copy of this map at the museum of the Muziris excavation. 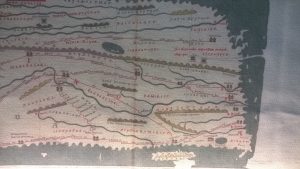 There are also online versions available of the map which is several meters long. The portion pictured here is the most easterly section.

Morgan, “Karumba Devi is another name of the Goddess Bhagavathi, a form of Kali. Recent research indicates that it may have had several earlier dedications, including one to Pattini[1], a goddess or spiritual entity these days only worshipped in Sri Lanka.”

We arrived at the temple mid-morning to throngs of people queuing up to go into the temple. It was a festival day and as such I, as a non-Hindu, wasn’t allowed to go in. Some Hindu temples have parts of the temple grounds which are restricted to men-only, or Hindus-only. I was however able to walk around the outside and take pictures. Quite often there are places to offer flowers and make donations, puja, and there was an impressive construction outside the entrance to the temple… see photo. 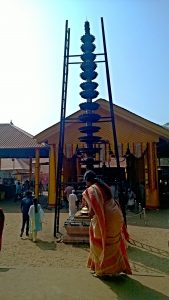 (At the entrance to the Bhagavathy Temple, Kodungallur – Morgana Jan 2017)

The temple itself is built in the Malayam style, which is unique to Kerala. Since there are heavy monsoon rains in this area the long-gabled roofs are well equipped to cope with the torrential rains. 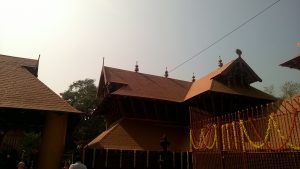 (Dedicated to the Goddess Bhagavathy, the temple is built in Malayam style, unique to Kerala – Morgana Jan 2017)

In his book “Isis Goddess of Egypt & India” Chris Morgan describes the Bhagavathy Temple at some length. He was curious as to the underlying structure and the older Kali temple. He cites another work “The Secret Chamber, a historical anthropological and philosophical study of the Kodungallur Temple” by Induchudan, (1969):

“This intriguing title is a reference to a continuing mystery connected to the temple’s construction. There is a door on the western wall of the sanctum sanctorum of the Kali shrine which opens to give a view of the western wall of the secret chamber. There are no doors or windows above ground, the walls are made of granite with a stone roof. On Kali festival days, this door is opened to allow certain VIP’s to see a red cloth draped over the secret chamber. There is no way to this chamber from inside the temple. Something terrible and mysterious is presumed to be located in the secret chamber, but nobody knows what. Even so, the existence of the chamber and connecting tunnel have an impact on the life of the temple.”

Morgan, “Could it be true, as some say, that the ‘remains’ of Pattini, a goddess whose rites closely resemble those of the Egyptian Isis, are hidden in this chamber?”

There is also the theory that this chamber was used for initiations. Morgan cites the work of Gananath Obeyesekere, who thinks that the chamber was both ‘tomb and womb’.

He writes that Obeyesekere also investigated “whether similar initiation tunnels might exist in other local temples. He found another rare example in the temple to Shri Rama in Tiruvilvarnamala. (About 100 km from Kodungallur). In a ritual call Punarjani Guha, meaning rebirth, devotees crawl along a 150m natural tunnel. Parts of it are very difficult to crawl through and as such it is considered to be quite a challenge.

The major festival connected to the Bhagavathy temple is also quite ‘challenging’. It is called the Bharani festival and is “one of the major festivals of Kerala. It is a month of festivities from the Bharani asterism[2]  in the month of Kumbham to 7 days after the Bharani asterism in the month of  Meenam. It normally falls between the months of  March and April. The festival usually starts with a ritual called ‘Kozhikkallu moodal’ which involves the sacrifice of cocks and shedding of their blood, which forms an important feature of this temple. The members of the “Kodungallur Bhagavathy Veedu” are allowed to participate in this ritual. It is to appease the goddess Kali and her demons who take delight in blood offerings.”

“’Kavu Theendal’ is another major part of the festival. Bhadrakali being the patron of the royal family of Cranganore, the Raja of Kodungallur plays an active part in the celebrations. Standing on a platform built around a banyan tree, the Raja spreads out a silken parasol soon after the door of the Devi shrine is opened. This gesture represents a permission given for all castes to enter the precincts of the temple for worship. Devotees run around the temple three times with sticks in their hands, before entering the shrine. The ritual commemorates the slaying of the demon Daruka, and the sticks are said to be substitutes for the swords and other weapons used for the ritual in the past.

During this ritual, Vellichapads, (oracles of the goddess), dressed as the goddess and said to be possessed by her, run around the temple in a frenzied trance state, waving their sickle-shaped swords in the air while the members of their retinue offer reverence over the inner quadrangle of the temple. They yell out lewd, bawdy, abusive cries at the goddess, which is said to please her. This is followed by a purification ceremony the next day.” 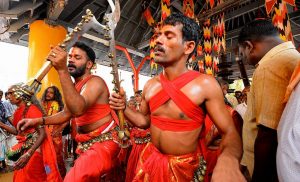 Note the use of the sticks, which is reminiscent, I think, of the Wild Hunt dancers. They are also a substitute for the sickle-shaped swords carried by the Vellichapadu. Adorned with bells the swords are also known as “Oracle swords”. 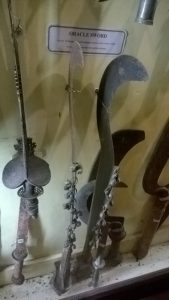 “Oracle sword, used by the Vellichapadu (local language) known as the revealer of light, is a mediator between the deity and the devotee – Kerala Folk Museum, Morgana January 2017)

Chris Morgan also describes this festival in detail in his book – he also writes, “The female Vellichapadu have special initiations into the mysteries of the goddess. Because of this, they are able to produce oracles for clients, predicting the future but also providing reassurance, chastisement, and one presumes even help resolve disputes”.

“A large congregation of velichappadus (meaning ‘revealers of light’ in Malayalam) arrives in the temple as part of the festival. Also known as oracles, the velichappadus wear red costume and smear their body with turmeric powder. They wear huge waist belts studded with bells and hold aloft sacred swords of different sizes and shapes. The oracles perform a frenzied dance, repeatedly slashing their foreheads with curved swords. As a supreme symbol of their devotion, they make a sacrificial offering of their own blood to the deity. The oracles and devotees go around the temple chanting lewd songs in praise of the goddess.” (http://www.indiavideo.org/kerala/festival/velichappadu-oracles-kodungallur-7045.php)

Morgan, “There are several theories as to why this strange interaction occurs, but a good one advanced by Induchudan, is that the underlying focus of the Bharani festival is the original cult of Pattini, whom we have identified as a form of Isis. In a sense, it is a temporary reclaiming of the shrine by the remnants of her original devotees. The focus of the rite would have been the secret chamber, which the candidate entered and then re-emerged through the tunnel reborn. The opening of the umbrella, the pollution and the frenzied run, all centre on the eastern, largely unused portico which is really the home of Pattini. The left breast is also said in Tantric lore to be the seat of a woman’s shakti power. Thus women pilgrims do expose their left breast whilst singing and chanting in the festival.

Almost all scholarly commentators agree that there is a something extremely heterodox, perhaps even alien, in the ritual activities at this temple. Many such as author Obeyesekere in passages discussed earlier, ascribe this to the influence of the Syrian cult of Attis and the goddess Cybele.”

As I mentioned earlier I was at the temple in January 2017 whilst another festival was being held. Although I couldn’t enter the temple I could walk around the outside area. And there were, not quite the velichappadus with the Oracle swords, but ladies who were giving readings using parrots.  I decided to have a reading. The parrot was let out the little cage and it picked a card from the shuffled, spread out deck. Then the lady interpreted the card. 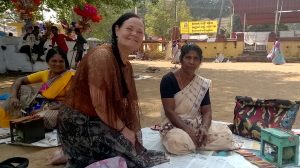 Without a doubt, the Bhagavathy Temple is one shrouded in mystery and well worth a visit. With Morgan’s book under your arm, it becomes even more intriguing. Perhaps this really was the original site of the Temple to Augustus?

Interview with Mogg Morgan, where he talks about Muziris: https://www.spreaker.com/user/occultofpersonality/mogg-morgan and here: https://www.youtube.com/watch?v=D3AH_Gma3ic&feature=youtu.be

“The Secret Chamber, a historical anthropological and philosophical study of the Kodungallur Temple” by Induchudan, [Trichur: Cochin Devasan Board] (1969)

The Cult of the Goddess Pattini. By GANANATH OBEYESEKERE. Chicago: University of Chicago Press, 1984. xvii, 629 pp.

[1] Pattini, or yogini, a supernatural entity

"Morgana is Anglo/Dutch and lives in the Netherlands. She is a practising Gardnerian HPS. Over the years, she has facilitated a variety of Wiccan groups. She is co-editor of the international and bilingual "Wiccan Rede" magazine, which was launched in 1980 and is coordinator of Silver Circle, a Wiccan network in the Netherlands. As International Coordinator for PFI she travels extensively giving talks and workshops about Wicca and Paganism."
Bekijk alle berichten van Morgana →
Dit bericht is geplaatst in English articles met de tags Bharani festival, India, Isis, Kerala, Muziris, Pattini, Vellichapadu. Bookmark de permalink.