Review: A Beautiful Resistance – The Fire Is Here 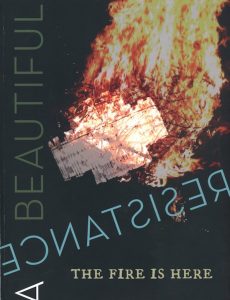 For some people, religion or spirituality and politics are two separate aspects of life that shouldn’t be mixed; for others, politics and spirituality can’t be separated because both are about what one believes in. The publishers of Gods & Radicals belong to the latter. In their view, paganism/polytheism/magic and revolutionary leftist politics are not only compatible, but supplement and enrich each other. They challenge existing power structures and oppressive worldviews, and offer alternatives.

A Beautiful Resistance is the journal of Gods & Radicals, published at Beltane and Samhain. The Fire Is Here is the second issue. Contributors come from different backgrounds, work in different traditions and with different deities, and voice different opinions. This diversity reflects the conviction that “one-size-fits-all solutions don’t work (…) the one-size-fits-all model led to massacres, gulags, and wars”, as expressed in Gods & Radicals’ booklet A Pagan Anti-Capitalist Primer.

Some of the articles that resonated with me were:

‘”Everything breathes the revolutionary spirit”’ by Nina George, about the demonstrations and strikes that were held between 1 and 4 May 1886 at Haymarket Square in Chicago, demanding an eight-hour working day. At one point a bomb exploded and guns were fired, killing at least 11 persons. Without evidence, several anarchists were held responsible and executed. This led the Second Socialist International to designate the ancient spring festival of the first of May as International Workers’ Day or Labour Day, to commemorate the executed ‘Haymarket Martyrs’. In our days of ‘flexible’ labour and smartphones, it is important to remember that leisure from work is a human right that has been fought for, and should not be taken for granted.

‘Deconstructing Local Mythologies’ by Alley Valkyrie. When she moved to a valley with a lot of pollen in the air, people told her that Native Americans in their wisdom used to call the place ‘Valley of Sickness’ because they knew that hay fever made it uninhabitable. She did some research and found that this was more of a comforting myth to the hippie descendants of white settlers than actual truth. Her experience shows that looking into the history of one’s own environment can help to connect to the spirits and energies of the place, and to depart from stories that serve the status quo.

‘The Wood at the World’s End’ by William A. Young and Hanne T. Fisker, who walked for days through the ‘barbaric’ realms to the north of the Roman wall in Scotland, where Myrddin (Merlin) is said to have wandered during a period of grief and transforming madness. Outside of ‘civilization’, no longer distracted by consumerist luxuries, they discovered that the other world many pagans and activists dream of, is already present within our own nature. They conclude “that the destructive tendencies of our modern culture may be curbed not through revolutionary violence, but simply through convincing people to depart from it, in the free pursuit of a better, happier life.”

‘Of Worlding: Stories of Becoming and Social Hope’ by Kadmus, on the difference in worldview between oral (pagan) and literate cultures that can be distilled from ancient texts. When the way to transmit stories and knowledge shifted from telling and singing to writing them down, the world came increasingly to be seen as a structure of objects subject to laws imposed by a singular, eternal, transcendent divine being, instead of an ever transforming aggregate of relations and events, with many different gods who themselves were subject to ‘fate’, i.e. the inevitability of change. I liked this article especially, since it coincided with some of my own intuitions about literate and illiterate societies; something I had been thinking about just before I received my copy of The Fire Is Here.

The magazine contains not only articles and essays but also poems, photo’s and drawings.