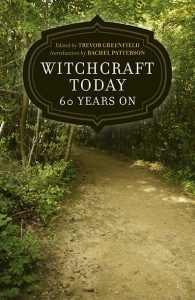 This is an anthology published in celebration of the 60th anniversary of Gerald Gardner’s seminal work, Witchcraft Today, published in 1954.

In the last 60 years, Witchcraft or Wicca has mushroomed into probably the most successful of all neo-pagan paths. One wonders if Gerald Gardner had any idea of the impact his book, which was originally called “A New Light on Witchcraft”, would have?

We know that one of the reasons that he wrote “Witchcraft Today” was to contest the writings of Pennethorne Hughes who had said that witchcraft, ‘as a cult-belief in Europe, is dead. As a degenerate form of a primitive fertility belief, incorporating the earliest instructive wisdom, the practice is over’ (Witchcraft 1952)

Gerald wrote in his book, “I have been told by witches in England: ‘Write and tell people we are not perverts. We are decent people, we only want to be left alone, but there are certain secrets that you mustn’t give away.’ So after some argument as to exactly what I must not reveal, I am permitted to tell much that has never before been made public concerning their beliefs, their rituals and their reasons for what they do; also to emphasise that neither their present beliefs, rituals nor practices are harmful.”

Philip Heselton in his essay The Making of Witchcraft Today goes into further detail.

Frances Billinghurst, from South Australia, continues with her essay on The Evolution of Alexandrian Witchcraft.

It is fascinating reading the various accounts of the different paths which have emerged during the last 60 years on. From Seax Wicca to Dianic Wicca.  From Solitary Witchcraft to Hedge Witchcraft, it makes one realise how diverse things have become.

In “Part II- Journeys on a Crooked Path” we read more personal accounts, of the difficulties people have encountered finding a group, or a coven to work with.  Some have found Faery Lore to be their guide whilst others have learnt the Art of Herbcraft.

This book is a delight for all those still wondering what Witchcraft really is – now in the 21st century. I am sure Gerald Gardner will be smiling and chuckling at the thought of Pennethorne Hughes’ original observation.

"Morgana is Anglo/Dutch and lives in the Netherlands. She is a practising Gardnerian HPS. Over the years, she has facilitated a variety of Wiccan groups. She is co-editor of the international and bilingual "Wiccan Rede" magazine, which was launched in 1980 and is coordinator of Silver Circle, a Wiccan network in the Netherlands. As International Coordinator for PFI she travels extensively giving talks and workshops about Wicca and Paganism."
Bekijk alle berichten van Morgana →
Dit bericht is geplaatst in Boeken, English articles, Recensies met de tags Alexandrians, Dianic Wicca, Gerald Gardner, Hedgewitch, modern witchcraft, Wicca. Bookmark de permalink.
We use cookies on our website to give you the most relevant experience by remembering your preferences and repeat visits. By clicking “Accept All”, you consent to the use of ALL the cookies. However, you may visit "Cookie Settings" to provide a controlled consent.
Cookie SettingsAccept All
Manage consent