Review: The Gods Within

The Gods Within – the Pagan Pathfinders Book of God and Goddess Evocations
Jean Williams and Zachary Cox
Moondust Books. ISBN 978-0-9547498-1-1 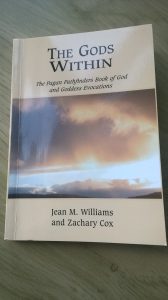 “Originally produced as a small pamphlet by the Neopantheist Society in 1979, this is a fully revised and much expanded edition”.

Indeed a small volume but full of interesting material. It is also pocket history of the “Pagan Pathfinders”, the experiential group Jean & Zach founded in 1975. Still going strong PP introduced many well-known witches and pagans of today to the world of paganism.

Jean & Zach are also well known for their involvement in the Pagan Federation – since the 1990’s.

“The Gods Within” is divided into two major sections: the how and why of using evocations. The word evocation is specifically used instead of invocation, “ .. traditionally, the occult use of the word evocation has referred to the magical practice of summoning a spirit or demon into manifestation in a triangle set outside a magical circle and to establish command over it, commonly regarded as a rather dangerous operation. This not what we do in PP nor is it the purpose of these evocations. The term is used in a psychological rather than magical sense; the aim is to evoke feelings, images and ideas from within the psyche of the individual”.

After an elaborate introduction, we move on to the “Gods and Goddesses”. Divided into three sets – Graeco-Roman, Egyptian and Celtic – 15 different gods and goddesses are reviewed.

From Aphrodite to Dionysus, from Pan to the Morrigan, each god or goddess is described from mythological attributions followed by an evocation. The evocations follow a certain order and style and together they create a body of recognisable ritual texts.

This is a wonderful addition to any witches’ Book of Shadows.

"Morgana is Anglo/Dutch and lives in the Netherlands. She is a practising Gardnerian HPS. Over the years, she has facilitated a variety of Wiccan groups. She is co-editor of the international and bilingual "Wiccan Rede" magazine, which was launched in 1980 and is coordinator of Silver Circle, a Wiccan network in the Netherlands. As International Coordinator for PFI she travels extensively giving talks and workshops about Wicca and Paganism."
Bekijk alle berichten van Morgana →
Dit bericht is geplaatst in Boeken, English articles met de tags evocations, invocations, paganism. Bookmark de permalink.
We use cookies on our website to give you the most relevant experience by remembering your preferences and repeat visits. By clicking “Accept All”, you consent to the use of ALL the cookies. However, you may visit "Cookie Settings" to provide a controlled consent.
Cookie SettingsAccept All
Manage consent