Review: The Journey into Spirit 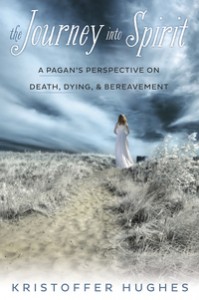 The book is divided into three parts, and I recommend to read all of these, in the order they are presented. Druid priest Kristoffer Hughes tells about important aspects of his life, and how his experiences influenced his views on death. The reader joins him on his journey. Hughes starts by talking about his work in a morgue – he uses the American word, because the British English word mortuary means something else in American English. Pagans probably won’t have a problem reading about morgues and the work of an autopsy technologist. Judging by the interest for television series such as NCIS, where Dr. Mallard (‘Ducky’) does his work with respect for the dead crime victims, there will be more readers able to cope with the subject. The first part is about ’the realm of necessity’, Abred. About the physical world and the physical nature of death. What Hughes learned from dealing with the body, acts as key to the spirit.
The second part is about the realm of spirit. In this section he explores questions of emotions, grief and the spirit. In Celtic this is the realm of Gwynvyd.
The third realm is that of infinity, the circle of Ceugant. “This is the realm of the soul, of singularity. It is from this place that all things originate, and it is to this place that all things return. It is the first point of being and the final destination; it is the source. We originate there. It is our true home.”
And there is a fourth part, that explores ritual and practice of bidding farewell, including a funeral for a Druid.

Kristoffer Hughes talks about a difficult subject. Difficult in the sense that we tend to dislike talking about death. And difficult in the sense that it is hard to give words to a philosophy of death and the afterlife. But Hughes is a good guide. He knows the subject from different sides. As a professional dealing with death and with bereaved families. As a Druid priest and funeral celebrant. And as someone who, like everyone else, had to deal with death in his own life: as a relative, as a bereaved person, going through pain and grief, mourning loved ones.

The book provides exercises and meditations, and Hughes asks questions so that the reader can come to his own conclusions. It is best to read the whole book, and thus be guided to Hughes’ insights, and the reader’s own ones. There is no shortcut, and a review can certainly not summarize the complete philosophy, the way of thinking about death offered in the book. In me, Hughes’ views strike a chord. He does find words to describe the unknowable. Maybe it is not your world view, not your idea of an afterlife. But Hughes will provoke your thoughts on the subject, whether you’re a Pagan or not. The meaning of death, and thus the meaning of life, is one of the great questions of mankind. Not many writers explore this mystery, and Hughes deserves credit for just doing that. But he has done it excellently, and that deserves even more credit.