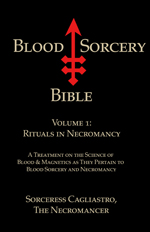 I have come to trust Original Falcon Press. They usually publish cutting-edge books from amazing writers Christopher S. Hyatt, Ph. D, Peter J. Carroll, Phil Hine and even Lon Milo DuQuette worked with them, and I have not been disappointed. Until now.

I always feel apprehension when opening a book entitled Something-or-Other Bible. It makes me feel that the authors have an overly high opinion of themselves assuming to publish a work that should be taken as Holy Scripture; they have no clue of what a Bible is – and that ignorance tends to spread over to the subject matter as well, or they simply haven’t had the imagination to come up with an actual title, which forebodes a rather dull read later on.

I also  raised an eyebrow at the name of the authoress. I am not against authors choosing their name, especially when publishing a book, but when one has to put ‘Sorceress’ in her name, it feels she doesn’t have the confidence that it would be apparent from what she writes. Using names of well known people (even in a twisted form) again feels unprofessional and gives the impression of lack of imagination.

For the above reasons I opened the book with dread. The arrangement is not unlike Christoper S. Hyatt’s books, which filled me with new hope only to be let down again by the actual content. The text starts by crediting “attending demons”, a “screeching demon” and “channeled words” of “the 7th Lubavitcher Rebbe”.

In the Prefatory Remarks we see a ‘Who Am I’ part, which I read with interest in the hopes of finding answers. Instead I found sentences like “I am unapologetic and brilliant, well read and an explorer of the processes of great scientists.” Usually people who are all those things have no need to emphasize the fact, although I see why the opinion was needed to be written down in this particular case – none of it becomes apparent in the book.

The basic theory outlined in the book is that blood is within us, therefore ‘Blood Sorcery’ is an absolute sorcery that needs no external tools, yet each ‘spell’ requires cutting yourself somewhere. While it is not impossible that the authoress’ natural nails are fit for such activity (although it does not seem so from the picture she provided for the cover), most people would require some form of blade. This is not the only self-contradiction in the book.

On page 24 she argues “Neither fate nor karma exists, and if they did (and I firmly stand my ground that they do not) they certainly would not exist around Sorcerers.”. Six pages later, however, there is  “ONE CLEAR NON NEGOTIABLE DIRECTIVE” (capitalisation of the authoress): “DO NOT SHARE THIS BOOK. IT IS A TALISMAN. IT CAME TO YOU BECAUSE IT IS YOUR TIME TO READ IT.” (sic). If it’s not my ‘fate’, why exactly did the book “come to me” and how come it’s “my time to read it? Rather confusing.

Generally the whole book is full of rather confused eso-occult-pseudo-scientific theories, a lot of them self-contradictory; ‘spells’ which require either cutting yourself, then doing something Gothic and exotic-sounding (putting six drops of blood in wine, smearing blood on a stone from a crypt, that kind of thing), or animal sacrifice. Sorceress Cagliastro comes across as a very confused and disturbed young woman, and I certainly would not recommend her books to anyone.