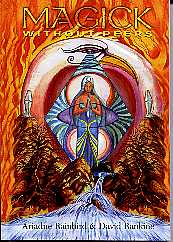 First reviewed in 1997 this book is still available. (And still at the original price of £12.95.. 🙂 ) I wrote then; ‘Magick without Peers’ is also described as “A Course in Progressive Witchcraft for the Solitary Practitioner” and as such can be used as a primer. Ariadne and David are experienced witches and have found out from hard experience the pitfalls which can arise on the path. Whilst they do not pretend to have all the answers they have gleaned their own experiences and have presented a manual which can certainly help one to become more aware of the pitfalls. As Progressive Witches they describe themselves as eclectic and universal and as such have used techniques from different countries and cultures. This however gives the book a somewhat chaotic feel – one minute an Eastern technique is being described and then next a Voodoo. But if you use it as a manual and treat each chapter as a lesson then it can provide a wealth of information. Various techniques such as visualisation, pathworkings, chakra work, working with elemental energies, complete with exercises, are included. Part one is concerned with ‘Mysticism an Magick’ and part two is concerned with ‘Religion and Ritual’ which I personally enjoyed very much. It contains descriptions of the seasonal rituals and a discourse on the initiation rites. All in all a work which is not meant to be read in a short period but as a reference and guide book.

NB 2013. This book became not just a classic in its own right but was the centre of a controversy in 2004 when ‘Progressive Witchcraft’ by Janet Farrar and Gavin Bone was published. They were accused of “stealing” the term Progressive Witchcraft. In fact they acknowledge Ariadne & David’s book in a footnote on page 58 and the fact that they had been using the term since 1989. Both books describe the term ‘progressive’ as being a more eclectic and universal approach to modern witchcraft encompassing diverse traditions and techniques  as I mention above.

"Morgana is Anglo/Dutch and lives in the Netherlands. She is a practising Gardnerian HPS. Over the years, she has facilitated a variety of Wiccan groups. She is co-editor of the international and bilingual "Wiccan Rede" magazine, which was launched in 1980 and is coordinator of Silver Circle, a Wiccan network in the Netherlands. As International Coordinator for PFI she travels extensively giving talks and workshops about Wicca and Paganism."
Bekijk alle berichten van Morgana →
Dit bericht is geplaatst in Boeken, English articles, Recensies met de tags magic, pitfalls. Bookmark de permalink.
We use cookies on our website to give you the most relevant experience by remembering your preferences and repeat visits. By clicking “Accept All”, you consent to the use of ALL the cookies. However, you may visit "Cookie Settings" to provide a controlled consent.
Cookie SettingsAccept All
Manage consent