David was one of the guest  speakers at the recent PFI Netherlands conference in April 2013. He talked about ‘The Grimoire Tradition’ an area of research which has been a focus  of  David’s work for the last few years. It was lovely to catch up with him and talk more about his recent work and some of the books he has worked on. 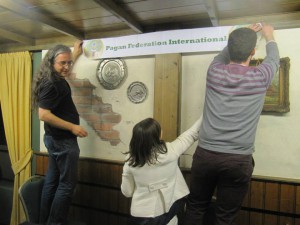 David helping out at the PFI Netherlands conference. Morgana, April 2013.

David told us the following about the Grimoire tradition:

“The word grimoire comes from the root grammar, and is used to literally represent a grammar of magick, or workbook of information and techniques. The books or manuscripts known as grimoires were generally written in the period from the thirteenth to eighteenth century. The style of conjurations and practices found in the grimoires can be traced back to earlier works like the
Greek Magickal Papyri (2nd century BCE 5th century CE) and the Coptic Magickal Papyri (1st 12th century CE). The elements commonly found in grimoires are the creation of the magick circle, magick tools, spirit lists (being the angels, demons or other creatures summoned), conjurations of the said spirits, and other correspondences or pertinent information.

The first of the major grimoires is Liber Juratus, or The Sworn Book of Honorius, which can be dated to the thirteenth century under its other name of Liber Sacer or Liber Sacratus. Liber Juratus contains the original Sigillum Dei Aemeth (Seal of Gods Truth) used by Dr John Dee and others, the magickal oath at the beginning, as well as long lists of appropriate angels for planetary and zodiacal work, and a whole host of material results to perform rituals for.”

When asked which book he had worked on and would recommend for anyone wanting to ’taste’ the life of a magician, or in this case Cunning Man, David didn’t hesitate and handed me the  book  he edited called ‘The Grimoire of Arthur Gauntlet – A 17th century London Cunning-man’s book of charms, conjuration and prayer’s’. 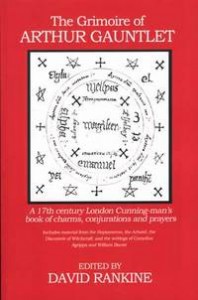 And indeed this is a veritable gem. The  original work now found in the British Library is listed under the rather non-descript title of :

“Sloane MS 3851”, which contains the following:

(Facsimile of the contents page is on p.34)

On the back cover we read: “The Grimoire of Arthur Gauntlet is an outstanding example of a seventeenth century London Cunning-man’s book of practice. Cunning-folk were practitioners of magic and herbal medicine who dealt with problems in their local communities. Cunning-man Arthur Gauntlet was based in Gray’s Inn Lane in London, and his personal working book contains a fascinating diverse mixture of herbal remedies, prayers, magical and biblical charms, with previously unseen angelic conjurations and magic circles, in an eclectic blend of practical magic for health, wealth, love and protection.

This unique manuscript demonstrates both the diverse and spiritual nature of such Cunning-folk’s books of practice, as well as their magical emphasis on Biblical scripture, particularly the Psalms, and their opposition to witchcraft, found in charms and conjurations. Arthur Gauntlet worked with a female skryer called Sarah Skelhorn, and drew on numerous preceding sources for his craft, including the Arbatel, the Heptameron, Folger Vb.26, The Discoverie of Witchcraft, the Book of Gold, the writings of the German magus Cornelius Agrippa, the astrologer William Bacon and Queen Elizabeth I’s court astrologer Dr. John Dee, as well as other London Cunning-folk.

In his introduction, the author provides fresh insights into the hidden world of seventeenth century magical London, exploring the web of connections between astrologers, cunning-folk and magicians, playwrights, authors and church figures. These connections are also highlighted by the provenance of the manuscript, which is traced from Arthur Gauntlet through the hands of such notable angel magicians as Elias Ashmole (founder of the world’s first public museum, the Ashmolean in Oxford), Baron Somers (the Lord Chancellor), Sir Joseph Jekyll (Master of the Rolls) and Sir Hans Sloane (founder of the British Museum), as well as the astrologer John Humphreys and the cunning-woman Ann Savadge.

This is a unique work which draws attention to the often neglected place of women in seventeenth century magic, both as practitioners (such as skryers and Cunning-women), and customers. It also emphasises the vital and influential role played by Cunning-Men and Women in synthesising and transmitting the magical traditions of medieval Britain into the subsequent centuries, as well as their willingness to conjure a wide range of spiritual creatures to achieve results for their clients, including angels, demons, fairies, and the dead.”

Complete with numerous facsimiles of the Holy Pentacles, especially the ‘Signum Pentaculum Salomonis’ and other delights the manuscript is made accessible for the twentyfirst century reader.

I was particularly interested in “the conjurations to make Fairie Sybilia appear”. The Sybilline oracles and the connection with Melusine and the serpent is a classic theme in Medieval Europe. Sibilia, like Melusine is reported to have turned into a ‘monster’ (half serpent) on the day of Saturn.  And woe betides the man who saw her on that day.

Highly recommended for  anyone interested in learning more about the different strands of the English Magical tradition.

"Morgana is Anglo/Dutch and lives in the Netherlands. She is a practising Gardnerian HPS. Over the years, she has facilitated a variety of Wiccan groups. She is co-editor of the international and bilingual "Wiccan Rede" magazine, which was launched in 1980 and is coordinator of Silver Circle, a Wiccan network in the Netherlands. As International Coordinator for PFI she travels extensively giving talks and workshops about Wicca and Paganism."
Bekijk alle berichten van Morgana →
Dit bericht is geplaatst in Boeken, English articles, Interviews, Recensies met de tags conjurations, grimoires, magic. Bookmark de permalink.
We use cookies on our website to give you the most relevant experience by remembering your preferences and repeat visits. By clicking “Accept All”, you consent to the use of ALL the cookies. However, you may visit "Cookie Settings" to provide a controlled consent.
Cookie SettingsAccept All
Manage consent