by the DOLMEN
review by Diane Narraway 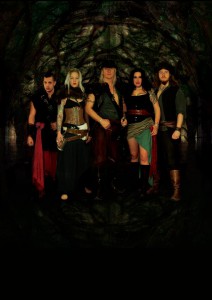 Although Saor Patrol and The Dolmen are both well-established with each band playing their own style of rebel folk rock and with several albums to their credit the collaboration of these two bands has produced something quite magnificent.

Crann Tara sees the Warrior spirit of Saor Patrol join forces with the heart and soul of the Dolmen in album which beautifully encapsulates the spirit of those who fight for freedom and the sorrow of those whose loved ones were lost in battle. It features eleven highly accomplished musicians and vocalists, all of whom pushed their abilities even further to create something memorable that will stand the test of time.

The raw tribal drumming of Kev Johnston, Mark Monaghan, Marcus Dickson and Chris Jones are perfectly complimented by the warm electric guitars of Josh Elliot and Stevie Legget working alongside the acoustic guitars and exceptionally versatile vocals of Taloch Jameson.

Add to the mix the hauntingly melodic voice of Keri Pinney and the wild sultry vocals of Kayleigh Marchant, both of whom are accomplished musicians in their own right with Kayleigh’s bass guitar providing an extra layer to the rhythm section, while Keri Pinney is joined by Ellie Goldsack another accomplished flautist bringing an ethereal quality to the album.

The powerful bagpipes of Charlie Allan connect the past and the present, bringing to life the unique Scottish heritage of Saor Patrol. Their presence can be heard throughout the album either providing a fierce defiant energy or soulfully adding a touch of melancholy that touches the heart as he laments the loss of his brothers in battle.

The album is mixed in such a masterful way that the essence of both bands can still be felt throughout, as their individuals styles blend effortlessly to create an album that is truly distinctive. It is incredible to think that something so beautifully crafted was created in just four days with the final product being a uniquely flawless masterpiece.

Whether Crann Tara sings to the hero within each of us or the sense of empathy felt for those who lost loved ones, it stirs the heart and awakens the spirit.