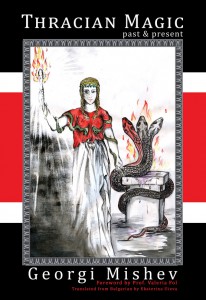 I first met Georgi online having met via a mutual acquaintance. It was quickly apparent that he was a sincere and dedicated follower of the Thracian tradition. I knew fairly early on that his wish was to share his love of Thracian and Bulgarian traditional culture. Although I had been to Bulgaria in 2006 it wasn’t until June 2012 that I would return. It was then that Georgi and I met along with other some equally charming Bulgarians. I will no doubt write more about Bulgarian customs and history another time. It is a wonderful magical country and every Bulgarian has their own story to tell.

I also had the good fortune to meet Ekaterina Ilieva in Sofia. She translated the text into English and she too told me many interesting things.

We had arranged to meet Georgi in Plovdiv and he took us to Starosel which was about an hour’s drive away. During the drive Georgi told me about his forthcoming book ‘Thracian Magic’ but also about the countryside we were passing. 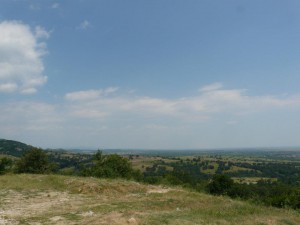 A view of the surrounding countryside looking from Starosel, (Morgana June 2012)

He told us of the local herbs and a little of the local folklore. I realised later when I started reading his book that much of this has been incorporated into the manuscript. Full of incantations and spells the book is like a modern Grimoire. Starting with an overview of and an introduction to “Balkan antiquity, Thracians & Bulgaria” Georgi is not slow to underline the importance of the heritage of the Balkan peninsula for European civilisation. Indeed Plovdiv is regarded as the oldest city in Europe and is worthy of a book on its own. 🙂

Continuing our journey, we took a pleasant walk to the site. The temple area has been researched by Georgi and others and photos with much information about the site are displayed at the entrance. 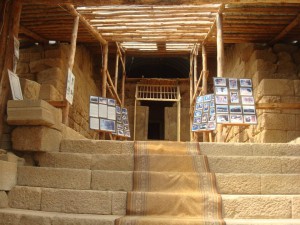 The entrance of the Temple at Starosel, June 2012

A number of the finds and earlier research at Starosel have also been integrated into the book. The whole area is now famous for wine and must have been a fertile area in ancient times too. Many of the spells included foodstuffs especially bread and grain.

In the section titled ‘The Concept of the Goddess’ we read of how the Great Goddess takes a central role in Thracian worship. It is here that Georgi notes how these pagan practises were absorbed into later Christian worship:

“The Holy Mother of God, as the ancient Great Goddess, is also called in many magical practices. A part of those ritual acts are performed during the so-called common festivals connected and woven in the cult of the Christian female saints, and another part is performed by healers and magicians.” 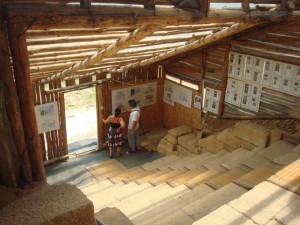 Georgi talks more about his connection with the Mother Goddess and ‘Thracian Magic’ in the interview with Kenn Payne.

This book is an absolute must if you are interested in the pagan heritage of the Balkan, Thracian and Slavic people. Of course a visit to Bulgaria is even better. Georgi would love to hear from you!

"Morgana is Anglo/Dutch and lives in the Netherlands. She is a practising Gardnerian HPS. Over the years, she has facilitated a variety of Wiccan groups. She is co-editor of the international and bilingual "Wiccan Rede" magazine, which was launched in 1980 and is coordinator of Silver Circle, a Wiccan network in the Netherlands. As International Coordinator for PFI she travels extensively giving talks and workshops about Wicca and Paganism."
Bekijk alle berichten van Morgana →
Dit bericht is geplaatst in Boeken, English articles, Recensies met de tags Bulgaria, Hekate, Hittites, magic, Thracian. Bookmark de permalink.