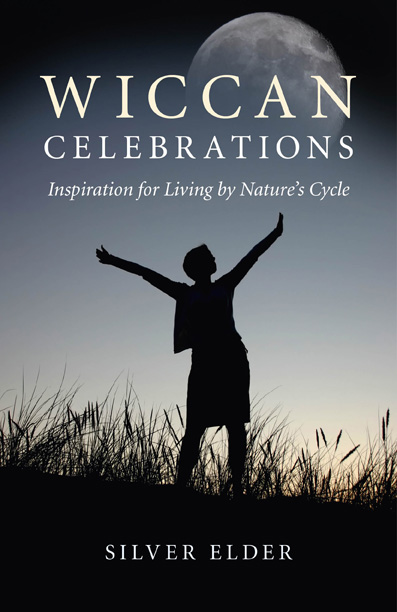 Attracted to this book by the name ‘Wiccan Celebrations’, I was at first disappointed when my order arrived. I had assumed that the book would deal with Wiccan Celebrations of Rites of Passage (I really can’t remember where I got the title from). But after discovering that it does in fact deal with the seasonal and lunar cycles, I became quite enthousiastic again. Silver Elder gives (rhyming) texts for all the seasonal festivals, and for rituals during the four stages of the moon. Long texts, but very poetic. Though they are “intended for Solitary or Coven use” I can imagine they’ll work very well in large meetings of Wiccans. With all the details given on decoration and the ‘stage directions’ (such as: the HP is facing East; on returning to the Altar, the HPS replaces the burner) any larger group can apply the rituals as they are meant. For smaller covens some amendments need to be made, but the texts can serve as inspiration for ones’ own creative writing too. And the BadWitch blog added the valuable suggestion to sing the texts. Bad Witch contacted the author and Silver Elder told her: “The prose and verse to the rituals in Wiccan Celebrations I ‘heard’, complete with chorals, mantras and accompanying music.”

The first part of the book is an introduction to Wicca and its core concepts, and Silver Elder won me over by the ‘Dear Readers’ page and the first lines of the page that is called ‘Introduction’: “Wicca is a Pagan magical mystery religion which encourages personal integration through living in tune with the Divine and Nature’s Cycle, by celebrating her seasons, Moon phases, Sun rises, Sun sets, Moon rises, Moon sets, her sounds, smells, feel and rhythms.” And by starting with a chapter on Ethics. Other chapters are dedicated to Nature; the God and Goddess; Sabbats and esbats; Wicca, Paganism and cosmology; The underworld; The otherworld (the four planes and more); Ritual; The circle; The four elements and spirit and Notes on Southern Hemisphere practice. In about 70 pages this book gives a sound basis or the how and why of Wiccan theory and practice. Mind you: this is one view on Wiccan theory and practice. There is no ‘one and only way’ in Wicca, so some things differ in this book and in other books on the subject. But it is a sound system, and there is a ‘Recommended Reading List’.

I would have liked a little more information on the author than the one line on the back of the book. Internet added two other sentences: “Silver Elder is a longtime student of Occult traditions. Wiccan Celebrations is based on her in-depth experience of Wicca. She lives in Victoria, Australia.” That explains the information on the Southern Hemisphere that is omitted in so many other books on Wicca. And there’s just a little more about the author on the publisher’s website. The inclusion of the Kabbalistic Tree of Life and some other details suggest an Alexandrian tradition.

The artwork in the book is great, the figures and tables very informative too. And I personally love the fonts used to print the book. All in all, I’m very happy I bought the book, and can recommend it to everyone interested in Wicca and Wiccan rituals. If you are part of a tradition with a set framework of rituals, the attribution of certain elements to particular festivals (the birth of the Sun King at Yule, for instance) will not fit, but as a source of inspiration, it is a joy to everyone.