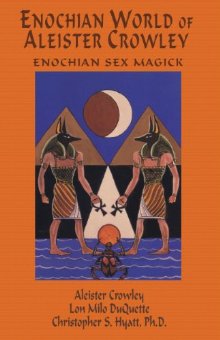 Do you want to know about Enochian magic? The core of this book is Aleister Crowley’s Liber Chanokh, a book that contains all you need to know to work with the system. That would be nothing new, it has been out for ages. The secret of the book is in the overview and comments, DuQuette and Hyatt explain the whole system in such a simple way that anyone can follow and understand. There are two chapters dealing with the theory and practice of sex magic in an Enochian context, which some could find interesting. There is even an Enochian dictionary to help out with the Calls, and a lot of instructive illustrations. All these combined make this book probably the best one on Enochian Magic to date – it’s short, simple and contains every detail you need to know. I highly recommend it to anyone who’s interested in Enochian magic, it’s ideal for those who are new to this way of working, but those familiar with the system can also gain new insights.

"Morgana is Anglo/Dutch and lives in the Netherlands. She is a practising Gardnerian HPS. Over the years, she has facilitated a variety of Wiccan groups. She is co-editor of the international and bilingual "Wiccan Rede" magazine, which was launched in 1980 and is coordinator of Silver Circle, a Wiccan network in the Netherlands. As International Coordinator for PFI she travels extensively giving talks and workshops about Wicca and Paganism."
Bekijk alle berichten van Morgana →
Dit bericht is geplaatst in Boeken, English articles, Recensies met de tags Aleister Crowley. Bookmark de permalink.
We use cookies on our website to give you the most relevant experience by remembering your preferences and repeat visits. By clicking “Accept All”, you consent to the use of ALL the cookies. However, you may visit "Cookie Settings" to provide a controlled consent.
Cookie SettingsAccept All
Manage consent