Review: The Woman in the Shaman’s Body 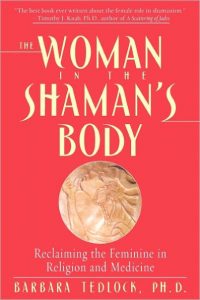 Already published in 2005, this book still is very interesting for scientists and practitioners. The author and her husband are as well scientists (anthropologists) as initiated shamans. She is the granddaughter of an Ojibwe midwive and herbalist (in Canada), but got her main training with Mayan shamans when she and her husband Dennis were doing academic research in the Guatemalan highlands. This combined expertise gives a very interesting view on shamanism, and especially on the role of women in shamanism now and in the past.

Previous researchers sometimes overlooked evidence because of bias. Women were not recognised as shamans, healers or ministers, and artefacts were interpreted with a male view. Thus figurines such as the Venus of Willendorf were perceived as ‘Pleistocene pinups’, as if prehistoric women had no culture of their own. That may be a mistake, or an attempt to willfully misread the evidence. A whole chapter is dedicated to ‘The Disappearing Act, how female shamanism was eclipsed’. Many anthropologists well knew that the word ‘shaman’ is used for men as well as women, they interviewed male and female shamans and couples, and Joseph Campbell wrote that the women were highly regarded. But one of the most influential writers about shamanism, Mircea Eliade (historian of religion) described almost only men. And only from written accounts: he never met a living shaman. It took forty years before his omissions were remarked upon.

Despite the seemingly universal nature of shamanism, different cultures and individuals have elaborated distinctive forms of shamanic practice. Hunter-gatherers in Asia and North-America, for example, call on spirit powers that are generally animals. … Shamans in pastoral herding societies, such as the Mongols of Central Asia, tend to rely on ancestor spirits, both male and female. They call on them for healing and to ensure the fertility of humans and domesticated animals. (p. 20).

(This fragment shows how readable ‘The Woman in the Shaman’s Body’ is.)

Part One of the book is about Reclaiming History.

Part Two about the Shamanic Tradition in Action.

The Female Cycle, Menstruation, Birth and Creation are subjects that one rarely sees in books, or only in specialised books. In this book, all of Part Three – five chapters – is devoted to this subject. Included are Blood magic; Menstrual taboos as feminine power; Weavers and celestial goddesses; and Birth, ritual, and the midwife art.

Part Four describes The Power of Gender and Shamanic Revitalization.

The Notes enable to read more; the Index allows for reference.