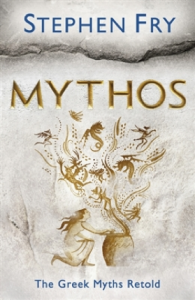 Whenever I have some time to kill, I can never help but wander through the bookshop at the train station with the bestsellers and momentarily popular range of books. I usuall try not to buy anything, as I already possess a mysteriously growing pile of ‘yet to read’ books. But when I laid eyes on massive golden letters on a spine that slightly resembled a marble pillar, I was intrigued. ‘MYTHOS’, it said. And ‘Stephen Fry’.

Before even reading the back cover I was immediately sucked into the skilful cover illustration of a girl, kneeling in front of a big jar, undoing its lid. Flying out of it emerge all kinds of little creatures and critters, mocking the girl and displaying a will to do no good. Pandora, the first woman in the Greek creation myth, the All-Gifted.

Being a comedian, actor, presenter, activist and tech-blogger and writer, Fry surely possesses many gifts too. Though I’ve always aspired to read some of his novels, I never did. Until he picked my favourite pantheon for his latest publication. Coincidentally his retelling of the Greek myths followed shortly after Neil Gaiman’s retelling of the Norse myths. Like Gaiman, Fry uses contemporary language. But where Gaiman is hidden as an author, Fry stays present, providing commentary and context. Fry demonstrates how these old stories are still relevant for us today by cleverly interweaving them with remarks on modern science, technology. He even goes on to demonstrate that these myths are still very much alive in our language as words or sayings and how they inspired other works of literature. So in that sense, the book not only explains the Old World to us but also the world around us.

Plotwise, we are taken from the creation of the first elemental forces to the ‘evolution’ of the Gods. We see how in the beginning deities were primordial, ‘without any interest or personality’. That changes gradually and certainly with the birth of Kronos – Time. Without time it was not possible to tell stories. When time began, personality, drama, individually of the Gods could start to unfold. We follow the three generations of deities that culminate in the third order, formed by  Zeus and his Olympians:

As each generation developed and new entities were born and in turn reproduced, so complexity increased. Those old primordial and elemental principles were spun into life forms of ever greater diversity, variety and richness. The beings that were born became endowed with nuanced and unique personalities and individuality. In computer language, it was as if life went from 2 bit to 4 bit to 8 bit to 16 bit to 32 bit to 64 bit and beyond. (…)  I like to picture the first stage of creation as an old-fashioned  TV screen on which a monochrome game of Pong played. You remember Pong? It had two white rectangles for rackets and a square dot for a ball. Existence was a primitive, pixelated form of bouncing tennis. Some thirty-five to forty years later there had evolved ultra hi-res 3D graphics with virtual and augmented reality. So it was for the Greek cosmos, a creation that began with clunky and elememental lo-res outlines now exploded into rich, varied life. [pp. 45-46]

Certainly, the best part for me is how Fry portrays the Gods and Goddesses with such fervour that makes them come vividly alive through their thoughts, actions and expression. Take for instance this eloquent glimpse of personality from the chapter about ‘The Infant Prodigy’ Hermes:

Within a quarter of hour of his birth he had crawled from one side of the cave to the other, throwing out comments to his startled mother as he did so. (…) Now standing upright (and still not half an hour old), this remarkable infant announced that he was going for a walk. “The close confines of this cramped cavern are occasioning me uncomfortably acute claustrophobia”, he said, inventing both alliteration and the family of ‘-phobia’ words as he spoke. “I shall see you presently. Get on with your spinning or knitting or whatever it is, there’s a good mother.” (…) [pp. 100-101]

Like the Gods it describes, the book is not flawless. For instance, there is no table of contents and no index. So it’s hard to find your way around and difficult to find the specific chapter you’re looking for. And you could say that the selection of the stories about humans, ‘The Toys of Zeus’, is random or that some well-known stories like the Trojan War and the tales of Hercules are only mentioned briefly. But none of that matters, because the stories that are told are likely to touch you in one way or another. Whether it is the choice of words or the insight into the characters that achieve this, I do not know. But I do know that some of these stories will stay with me and that I have gained greater insight – on many levels.

And that’s just it: Some books are read for information. Others are read to delight and stir the soul in recognition. Stephen Fry’s Mythos is one of them.

And if you don’t believe me, watch the author read an extract from the story of Pandora to decide for yourself: