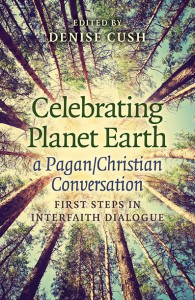 Let me begin by congratulating Denise Cush for compiling this extraordinary collection of essays. Although I am in favour of inter- and intrafaith initiatives I often cringe at some of the things I read. Whilst there are commonalities there are obvious differences between faiths/religions. In this book some of the ‘urban myths’ are dispelled between (neo) pagans and Christians. On more than one occasion I found myself saying “Yay!” rather than sighing in discontent at another attempt  at saying we are all really on the same path and God will forgive us anyway. 🙁

Denise Cush (BA Oxford, MA Lancaster, PhD Warwick), we read, “is Professor of Religion and Education at Bath Spa University, and has published research on young Pagans. She has taught Religious Studies in a sixth form college”.
She has edited this book and contributed the first chapter ‘Setting the scene, issues and challenges’ followed by Steve Hollinghurst’s excellent essay ‘No-one expects the Spanish Inquisition’.  Here he focusses on looking at how Pagans & Christians view each other “through the distorted lenses of their mythic histories.” Sometimes those histories are exaggerated because they are written by the victors who record what they want to.

Graham Harvey (Reader in Religious Studies at the Open University and author of many books on Paganism) offers the ‘Pagan View’. In a brief overview he summarises the major attributes of both paths and how we perceive each other.

Philip Carr-Gomm “is leader of the worldwide Order of Bards, Ovates and Druids, the largest Druid organisation. He is well–known for his writing on Druidry and related spirituality.”

In his essay on ‘Druidry and Christianity’ he asks the question “Can these two streams of spiritual tradition inform each other and even perhaps be combined in one path or practice?”

He uses the concept of the “Forest Church” as an example of how both paths can find common ground.

In chapter 11 Alison Eve Cudby who is also co-founder of Forest Church, writes about ‘Woven together: Can Christians and Pagans engage in shared ritual?’ She describes the feast, or seasonal ritual of Imbolc (2014) in which people from various traditions came together. The festival of Brighid/ St Bridgid is perhaps a perfect example of a ‘cross-over’.

Alison “Forest Church … begins from a different place. We recognise that we humans are just as much part of the natural world as the plants and wildlife surrounding us. They then become sisters and brothers… sharing with us in… the divine presence.” (2014)
Other contributors are:

Viannah Rain who is the Pagan Federation’s Interfaith Officer in Devon and Cornwall.

Tess Ward is a hospice chaplain, retreat leader and author of The Celtic Wheel of the Year: Celtic and Christian Seasonal Prayers.

Liz Williams is a Druid who writes for the Guardian and runs a shop in Glastonbury.”

Philip Shallcrass (Greywolf) who leads the British Druid Order recounts ‘The Avebury Gorsedd: an interfaith experiment’.  Many of you will also remember the closing ceremony of the Summer Paralympic Games (2012) where the following words were spoken by Rory Mackenzie on behalf of Help For Heroes:

And then, about 30 minutes in, Rory spoke these words:

The circle is unbroken, The ancestors awoken.
May the songs of the Earth and of her people ring true.
Hail to the Festival of the flame of root and branch,

tooth and claw, fur and feather, of earth and sea and sky.”

Denise concludes this book with the essay ‘Where next?; Suggestions for practical ways of going forward’.

She suggests that there are certainly areas where we can join forces and encourage further conversations and joint activities.

“These were identified as:

Not just finding commonalities but doing something together.  I think this is the real value of this book – showing examples of a community spirit which will work to inspire and invigorate.

Highly recommended for everyone who wants to take an active, positive role.

"Morgana is Anglo/Dutch and lives in the Netherlands. She is a practising Gardnerian HPS. Over the years, she has facilitated a variety of Wiccan groups. She is co-editor of the international and bilingual "Wiccan Rede" magazine, which was launched in 1980 and is coordinator of Silver Circle, a Wiccan network in the Netherlands. As International Coordinator for PFI she travels extensively giving talks and workshops about Wicca and Paganism."
Bekijk alle berichten van Morgana →
Dit bericht is geplaatst in Boeken, English articles, Recensies met de tags activism, Christian, dialogue, Forest Church, interfaith, paganism, Wicca. Bookmark de permalink.